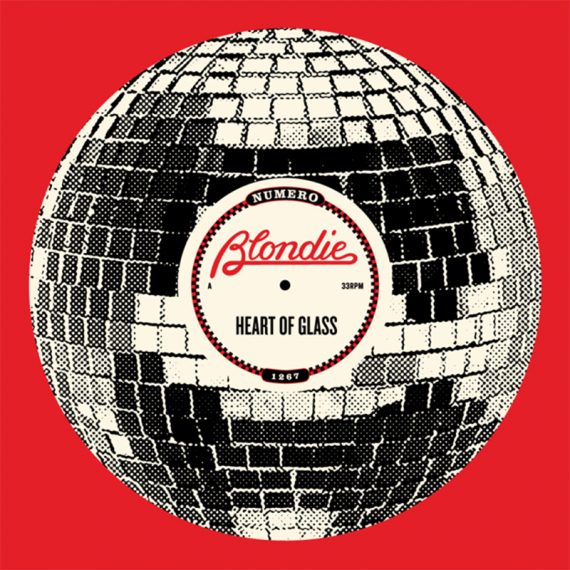 As the 1970s came to a close, Blondie released its third album, Parallel Lines. Helmed by producer Mike Chapman, the record streamlined the arty punk of the band’s previous efforts into a cohesive pop sound, with chiming, melodic songs like “Sunday Girl,” “One Way or Another,” and the band’s Nerves cover “Hanging on the Telephone” serving as sleek vehicles for Debbie Harry’s vocals and Chris Stein’s hooks. But it was “Heart of Glass,” a song included deep on the lp’s second side, that would take Blondie from NYC’s art-punk underground to mainstream pop success. On Friday, October 26, Chicago-based archival label Numero Group issues the Heart of Glass ep, which traces the complicated history of the song from a homespun demo to a chart-topping hit. What could come off as a novelty or “strictly for completists” piece becomes something thrilling here: over the course of five years and six distinct versions, the listener hears a remarkable evolution. “Heart of Glass” begins as “The Disco Song,” a rough, slo-mo demo recorded in 1974; from there, the band refined the composition into “Once I Had a Love,” which picks up the pace and adds decisively choppy, reggae-influenced guitars.

The final version, featuring Clem Burke’s hypnotic 4/4 beat and keyboardist Jimmy Destri’s Roland CompuRhythm CR-78 drum machine, is represented by three edits, the nearly six-minute “Long Version,” a stripped-down “Basic Track” take, and an instrumental version. The ep is rounded out by Shep Pettibone’s mix. Synthesizing the easy glide of disco and early electronic pop, the song owed a significant debt to Kraftwerk and Giorgio Moroder (who’d go on to work with Blondie and on Harry’s solo material) but found Blondie hitting on a singular sound, at once experimental and straight ahead, setting off poptimism debates long before the term had even been invented. “Back then, it was very unusual for a guitar band to be using computerised sound,” Harry told the Guardian in 2013. “People got nervous and angry about us bringing different influences into rock.” Serving as a prelude to Numero Group’s forthcoming Blondie: The Complete Studio Recordings 1975-1982 , due in fall of 2019, the Heart of Glass ep is a reminder of the song’s brilliance. Like Donna Summer’s “I Feel Love” or Liquid Liquid’s “Cavern,” “Heart of Glass” still sounds like it’s from the future, nearly 45 years after its inception. words/j woodbury

Further listening: Blondie :: Out In The Streets (1976 Demo)