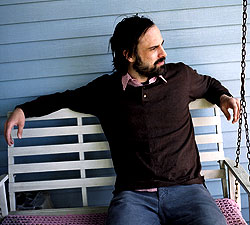 As previously reported Dave Berman and his Joos are the subject of director Michael Tully’s documentary following the band on their tour throughout Israel last summer.

Earlier last week, I had the opportunity to watch a screener of the film and am happy to report Berman appears to be in both good health and in good spirits, having recently rediscovered religion (as well as having buried some old demons.) This doc is a must see for those who have followed Berman’s music and poetry over the years.

Below: The following video for “I’m Getting Back Into Getting Back Into You” was shot by Tully in Jerusalem last summer while shooting Silver Jew in Israel. It contains this lyrical gem: “Wings and brandy on a winter’s night, I guess you wouldn’t call it a scene.” * * The track “Rebel Jew” can be found on the Silver Jews mid ’90s classic Starlite Walker LP.