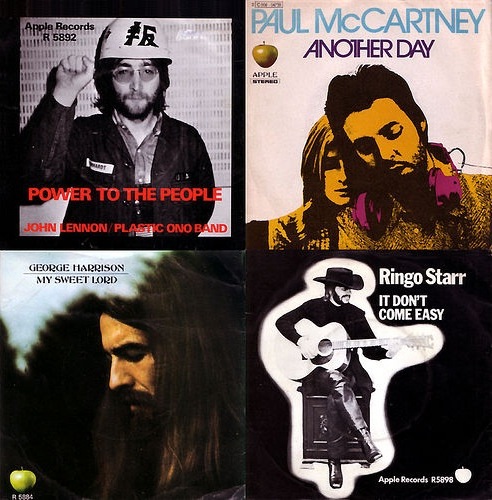 While reading Cold Splinters, I came upon a link directing me to a post entitled And Then There Were Four. In a nutshell the post juxtaposes the Beatles solo work immediately after their break up in 1970 — i.e., the first singles each member released – and each of the singles individual cover art. Visually, the post notes “how (the Beatles) saw themselves (or wanted to be seen): John the one-man revolutionary army; George contemplating holier things; Paul absorbed in silly love songs to Linda; and Ringo in a cowboy hat and leather trousers.”

The above then reminded me of an excellent post Derek Phillips wrote for Glorious Noise in 2003, Early Nineteen Seventy-Something Pt. 1 & 2, which tells the story of “The making of Come and Get It, the last Beatles album that never was.” It posits “What if the Beatles had made one more album? What would it sound like?” Phillips then goes on to carefully construct his dream “final” Beatles LP using tracks found on the members initial solo ventures. For Beatles fans, his notes on track selection, alone, are worth the read.

6 thoughts on “The Beatles :: After The Break Up – The Singles”