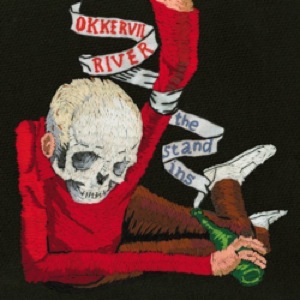 Sometimes the movements of time’s big hands adjusts our fuzzy view of the past and pulls the picture into focus. Here we are in September of 2008, and Okkervil River’s The Stage Names, a record that was at first loved and then capsized by the digital wake of 2007, has floated to the surface unharmed. The Stage Names made few (if any) top ten lists last year, despite carrying the year’s greatest song, “John Allyn Smith Sails,” a requiem for poet John Berryman (oddly enough, that makes two years in a row that a song about Berryman is my favorite song of the year; see 2006’s “Stuck Between Stations” by the Hold Steady).

The Stage Names is an eloquent, purposeful masterpiece, the kind of record so alive with ideas and characters and wisdom that it seems to stand outside of time almost immediately. The odd, vaguely antiquated touches — early rock guitars, classic horn sections, a lyric sheet printed in paragraph form — certainly didn’t make Okkervil seem too concerned with the thoughts of the day, at least on a surface level. And perhaps that’s not without reason — The Stage Names is a close examination of everything that floats around the American culture of celebrity and financial “success”, and an attempt to redeem the people caught in its seismic boom; perhaps it’s necessary to stand outside of time in order to critique it.

The Stand-Ins, out Tuesday on Jagjaguwar, is a continuation of The Stage Names’ themes, both musically and lyrically. But where that record finds something worth celebrating in the midst of the mire — the bolts of grace that come with reading a good book in “Unless It’s Kicks,” for instance — The Stand-Ins is a mostly mournful affair. The songs here are more tender than their Stage Names counterparts, perhaps because the subjects are even further from the glittering circle of the scene. We meet the pre-fame boyfriends of actresses, we read the muddy hearts of porn stars, we experience the struggles of creative ennui. Will Sheff’s songs are about the people who flirt with the spotlight like a roach in the corners of the kitchen; when the light finally hits them, they shudder and sprint. And when all is clear, they make another go. Celebrity blesses its recipients like an atomic bomb.

Musically, The Stand-Ins is, as the name implies, something of an understudy, but that’s largely because the lead actor is such a star. Even the most cursory spin of this record is something akin to catching a Broadway matinee: not quite the main act, but it sure ain’t community theatre, either. “On Tour With Zykos,” the album’s best song, plays like a making-of featurette for The Stage Names; the narrator finds himself arguing with his girlfriend before heading out on tour, later returning home from a day at a meaningless desk job too tired to write; he gets stoned and watches TV instead of “revealing divine mysteries up close,” which he isn’t really feeling anyway, and yet at the end of the day he somehow finds himself the object of people’s fantasies. Guitars swell and bows pull across strings and somehow being in a band seems like the most tragic job in the world. The previous track, “Pop Lie,” which is itself a meditation on the problematic influence that singers have over their audience, is pulled back into the light, and we suddenly don’t know what to believe. And that’s exactly the point.

By now, you could make a case that Sheff is practically obsessed with the restoration of glory and dignity to the smudgy chests that have been worn out by society’s constant groping. In the hands of a lesser writer, this conceit could be patronizing, but Sheff’s literary — not to mention songwriting — talent is nearly unprecedented; I’m almost loath to pick at the fabric of these songs for fear that there’s no end to the yarn. But to leave Okkervil’s world untouched is to not realize that these songs are about all of us, too, that we’ve all been infected by the false vision of success. The glitz and the glamour comes tumbling all the way down the starry stairs, and it doesn’t stop just because we’ve turned off the television.

Like The Stage Names, The Stand-Ins closes with a eulogy, but where “John Allyn Smith Sails” was a paean to Berryman’s suicide, a sympathetic look at the death of a man whose body of work will far outlive its creator, “Bruce Wayne Campbell Interviewed on the Roof of the Chelsea Hotel, 1979” is a lament for the career death of the titular never-was glam icon. Campbell, who recorded two obscure records for Elektra under the nom de rock Jobriath, faded into obscurity after a failed publicity blitz, performing as a cabaret act under the name Cole Berlin and living in a glass pyramid on the roof of the Chelsea until his death from AIDS in 1982. Unlike Berryman, who was felled by an instant crack of his own creation, Campbell’s death — both in the music industry and the world — was a slow, drawn-out, and humiliating process that he certainly did not choose but couldn’t escape. Berryman leapt from the Washington Avenue Bridge in Minneapolis, but Sheff pictures Jobriath finally being lifted into his spaceship, flying ever skyways until he “forgets the crawling way real people are sometimes,” while cabaret horns and splashy cymbals play the requiem, fading eventually into a lilting acoustic guitar and keyboard shimmer. Berryman felt so broke up, but Campbell got to go home.

And this redemption seems to be the lesson that Sheff wants to teach so badly, if we’d only be willing to hear it; in album opener “Lost Coastlines,” which finds him duetting with former Okkervillian/current Shearwater head Jonathan Meiburg, the pair yelp “We’ve lost our way but no one will say it outright” before descending into a chorus of carefree “la la la”s. These maps that we’ve been following are only leading us into the outer darkness, farther and farther from home, and we know it; we’re somehow more attracted to the sickly fluorescence of false spotlight than we are to the sun. And yet, and yet — we may be dead in the darks below the surface, but our hands still somehow reach above the water, searching for some sunburst sense of warmth, some hand to take hold of the scene, some pro at his editing suite stitching up some bad movie. words/ m garner