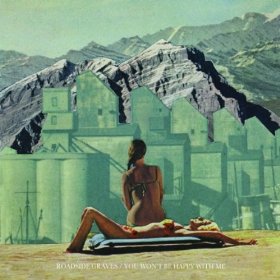 When a piano silhouette sparkles through the first moments of “Demons,” you might think you’d reached for the wrong CD. The uptempo percussion sequence that immediately follows would only embolden this belief–that is, until John Gleason’s familiar rasp comes brimming into focus. And, as with its opener, so it goes throughout much of the Roadside Graves EP You Won’t Be Happy With Me: new textures lightly tethered to the band’s previous work by familiar intonations and big crescendos, themselves fast becoming a trademark of the New Jersey-based explorers of Americana.

Keys and percussion are indeed the biggest refinements here. Before, we heard rolling bar-room ivory, and now we have the fiery flutter of Jerry Lee Lewis-like proportions. The rifle beat of drums feels, at times, as if two drum sets are powering the rhythm, though it’s really just guitarist Jeremy Benson joining with a floor tom. The brightest example of this more refined sound is the epic ode “Liv Tyler.” With nearly three minutes of lyrical introduction behind them, the Graves open up nearly every bit of sound that their instruments are capable of producing, which cascades over itself time and again across four additional minutes. There are other refinements, too, such as “Jail,” where the acoustic plucks just a bit more crisply than previously encountered. (Live, the band also has a habit of closing shows with this song, playing amongst the crowd community jug band style, dancing in a circle, screaming mic-less–a sweatier, more epicurean take than its recorded version. So, if you think you’ve heard it before, then you probably haven’t.)

Recorded in a cabin in upstate New York, you’re not finding the cold, spartan environs of a Bon Iver situation. By contrast, you hear something both big and less rustically conceived. In that way, even the group’s last long-player, My Son’s Home, might seem more instrumentally linked to something like a cabin. But lyrically, maybe some of those introspective qualities of the recording space come into play. Take “Liv Tyler,” which doesn’t seek to cheaply highlight pop-culture. Instead, it wonders on life in a world of questions; where we’re simply trying to carve out answers, only hoping they end up being the right ones. It takes a third-person relationship and makes it personal, internalizes it–a persistent quality throughout the record. This differs somewhat from previous Roadside Graves ruminations that seemed at times to come from afar.

These just-beyond-subtle touches make a refreshing turn for the increasing agile group. Staleness is a possibility for any band with a handful of records under their belt, but it often seems to be more tenuously walked for a band like the Graves, whose brand of music encompasses so much of the American musical core. Trying to craft Americana can make something “new” sound unremarkably like everything else if not done conscientiously. To get around that, it would seem the Roadside Graves have treated their approach as they’ve treated their songs. They peel back the layers, inserting themselves into popular motifs to arrive at new conclusions–about people, about the band themselves. words/ j crosby