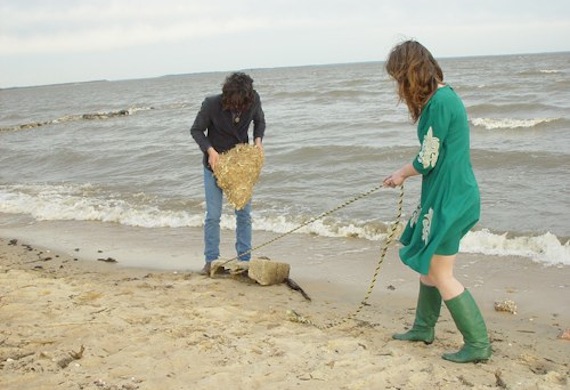 After settling into the blissful haze that is Teen Dream, Aquarium Drunkard guest Raquel Nasser caught up with Victoria Legrand of Beach House in the few days between the band’s European and North American tours. Those of you doing Coachella can catch the band this Saturday on the Mojave stage at 4:25, and then wait a mere seven hours, with bated breath, for Devo’s set on the very same stage.

Aquarium Drunkard: So how are you feeling about the upcoming tour?

Victoria Legrand: There is some excitement, some nervousness, but nothing to complain about. As long as Alex and I are working, getting things done and keeping busy, we’re okay. With us, the only times we are unhappy is if we feel worried about something, we’re doubting something or we’re confused. But as long as we have projects; we’re like hyper kids that always have to be accomplishing something in order for us to feel fulfilled. But fulfillment is fleeting! And we’re always looking for ways to challenge ourselves as artists.

AD: What do you consider a “project?” Is simply being on the road a project, or are there other pursuits you two take on to keep your minds active?

VL: Well, recently, Alex built these motors for lights, these furry-light-tree-jellyfish space aliens that we took with us to Europe, but we’re always trying to add to our live show. The biggest project is obviously songwriting, but there’s always little things that we feel like we can do to make things more exciting. And we’re learning a lot– touring is not necessarily a project when it’s happening, but it’s a real experience. You’re always different at the end of the tour, and they always teach us something about a stage setup or energy levels, sound; it’s a great learning experience.

AD: How did you end up in Baltimore?

VL: Well I grew up in Cecil County, Maryland and I have a lot of family in the area… but after graduating as a theater major, major loser, I went to Paris to a conservatory professional school and I got selected to attend for another year to do more insane training for experimental theater. And I’d always been writing music and theater and singing, and I started writing songs when I was 18, so I met a crossroads in my head and decided; “I don’t want to do other people’s work anymore.” I wanted to work on my own ideas, and music was like a very attractive person…and alluring… and free! It was like, “I’m so free! You can do whatever you want with me! And I’m always going to change and be exciting! Come live with me forever!” And I thought hard about where I needed to be to do this. So I followed my friend Dirk who I’d gone to school with to Baltimore, and that’s where I met Alex. And that’s the rest of my life right now. I basically sniffed my way back to music and ended up full-cycle in Baltimore, without even thinking or realizing how weird it would be to end up in the place where I was when I was six years old. It’s crazy how life happens subconsciously; maybe we are predestined. Not to be cheesy, but I feel like there’s a little bit of the creepiness going on in life.

AD: And what about Baltimore has fueled your creativity? Was Teen Dream written there?

VL: Teen Dream was written over about 8-9 months in Baltimore in this practice space that we got. It’s our favorite place in the world; it’s this giant studio where we keep all of our instruments and all of the stuff that inspires us is littered all around it. But Alex and I are completely indebted to Baltimore; it’s this affordable place to live, it’s not distracting or diluted, there are no threats. It’s just what it is and it allows you to make whatever you want. If something happens with it: great! If something doesn’t: great! There’s no urgency or pressure, it’s just always there. And it kinda feels like we live, and we’re here less and less now, but when we come back, it feels like nothing’s changed. It has this timeless thing going on, as it’s just an old town by the railroad tracks. Also, it’s very poor and has a lot of abandoned housing and it’s dilapidated and no one really cares about planting gardens everywhere, so there’s a lot that’s really sad about it. But these negatives have preserved a lot of positives; it’s not overpopulated with artists and what’s good is innocent and preserved. It’s not a sexy city, like a Brooklyn or a Portland. But its sadness and its loss have kept all these other things growing and that’s the heart of the city’s character. You have to cherish some of these things that people find unappealing— like John Waters’ movies, loving and glorifying the nasty and vulgar, but ultimately very lovable qualities of this place. And that concludes my crazy tangent about Baltimore. Must be the coffee.

AD: It seems like an easy place to be seduced by. I’ve heard much of the same from friends of mine that live there.

VL: It’s true, but there are places like it all over this country! Like Hannibal, MO, where Mark Twain’s from, or Cumberland, Maryland; there are a lot of interesting old towns that invite you in. But you can make anything anywhere. And ultimately, it’s not where you are, but what you’re doing there and the people that are in the city with you. That’s all that really matters.

AD: So, why did you decide to make the video for “Silver Soul,” of all the songs on Teen Dream? Was there something that you needed to convey that you felt you hadn’t when writing the song?

VL: I get really intense visions when I write songs and when I believe in something, my imagination goes crazy. But I had never made a video before and the only reason I did was because when writing this song, I had this narrative in my head instantly. I saw this girl, I saw the hula hoops, I saw the silver, I saw the shower and the leg; it was one after another and I was just like, “What am I going to do? I have all these things in my brain?” So I talked about it with Alex and he supported the idea of me making the video, even though I had no experience. And I felt compelled to do it because the vision was so strong. Also, I’m continuing to challenge myself— I think the artist always needs something harder or different to do in order to stay alive. So that’s why I decided to do it— so I could over stimulate myself even more.

AD: It’s such an intimate video.

AD: Well, I was curious about how the girl felt about those shots!

VL: Well, I knew when we were filming it. I told her, “Ok, I think your butt looks really amazing. Would you be mad at me, if when I’m editing it, that I use some shots of your butt, like, really close?” and she was like, “no, no problem.” So I did ask permission to do that!

AD: Speaking of intimate, how do you think you and Alex get by on making such sensual music without being involved with each other?

VL: I think it’s the unconsummated, non-sexual nature of who we are to each other is the tension fundamentally. It’s as if the animals in us that are not animals with one another are in the music, I suppose. And I think that’s our lot in life; we’re musical soulmates. And I realize it more and more; it’s a lot harder to find your musical partner than your love partner.

AD: And they don’t necessarily have to be intertwined.

VL: No, and that’s the really special thing! And I think that’s why people always ask or they don’t understand or they don’t believe, “Well, how can you do this without this?” and exactly, that’s why! Because if we were involved, I think our project would destroy itself. I wonder how people do that. It’s something that I don’t really understand. But honestly, either way, I don’t really have time; my love, fortunately or unfortunately, is in making things and writing things, listening to other people’s music and reading about other people. My relationship is with the universe.