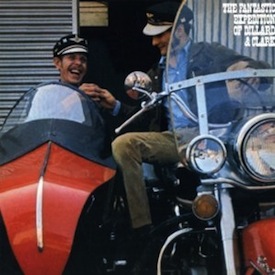 The Fantastic Expedition is one of the world’s greatest country rock albums, ahead of its time and seriously overlooked even today. I would take it over Sweetheart of the Rodeo any day, as it’s my favorite piece of magic from the Byrds’ best songwriter, Gene Clark.

Doug Dillard and Gene Clark, after leaving their respective acts (Dillards and Byrds), teamed up with Bernie Leadon (Hearts&Flowers/Flying Burrito Bros/Eagles), Sneaky Pete, and Chris Hillman for the Expedition. “Out On The Side,” the album’s opener, was an underground hymn in its time, and must be one of the finest produced tracks I’ve ever heard. Not easily accessible yet so perfect, it’s an understated masterpiece. The lush sound, the drums that seem barely there but echo away on the fills; the coda to this song, around 2:45 with the off-time fill, has to be one of rock’s most inspired moments. And while “On The Side” is worthy of intense dissection, the rest of Expedition continues to represent. A lush and laid-back bluegrass troupe owns it on “She Darked The Sun,” setting the tone firmly, nailed down by the straight-up Dillards feel and Clark’s soulful harp on “Don’t Come Rolling.” The mystical Gene Clark sound takes it back for the next few songs: a triumvirate of gems molding the sweet spot of the record and providing all the proof we need to declare this a legendary match-up. I love the lazy swing to “Train Leaves Here This Mornin‘” with the suggestive lyric to its chorus.

What follows has become a newgrass standard, printed in bluegrass songbooks and covered by the New Grass Revival. “With Care From Someone” is probably one of the first real progressive bluegrass numbers, and still one of the best. All of these songs are Clark originals excluding the well-delivered spiritual “Git It On Brother” (usually “Get In Line Brother“) and a bonus take on the Elvis number, “Don’t Be Cruel.” “Something’s Wrong,” the album’s closer, is brilliant perfect Gene Clark.

The Expedition grows better and better, undoubtedly, with each listen. It is pure joy, pure beauty, a one of a kind favorite and sort of a miracle for the genres of both rock and country. words/ b mcgrath

19 thoughts on “The Fantastic Expedition of Dillard & Clark”