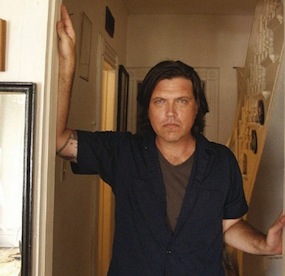 Aquarium Drunkard favorite Richard Buckner is one of America’s greatest living singer-songwriters, but he’s been awfully quiet for a while now. We recently caught up with Buckner, prior to his show, in the parking lot of The EARL in Atlanta. Buckner gave us the skinny on his silence and the lowdown on the his new record, Our Blood, due out August 2nd on Merge Records.

AD: It’s been five years since you’ve put out a record. What have you been up to?

Richard Buckner: Well, you know, for years I was putting out a record at least every two years. I’d tour, make a record, tour, make a record…Around six years ago a guy contacted me and he was trying to make a film and wanted me to do the score for it. So I did it and it took, like, a year and a half after my last record, which is usually when my next record would have come out. I thought I’d do some weird little instrumental tour based on the soundtrack and then make my next record. Well, between the lawyers and everything else, this thing never came out and I had nothing to tour on and I didn’t have a new record to make because I had spent all my time on this soundtrack. So I moved to Upstate New York and started working day jobs until I could get my next record out.

AD: You’re a notorious nomad. Does this finally feel like home?

Richard Buckner: It never does. I mean, my girlfriend and I will look at each other and say, “What are we doing in Kingston, New York?” We just moved up there because she got a job on a sheep farm and we’ve got this place–this weird old grange hall–which for me would be perfect for recording because it’s got these really high ceilings, but we just moved up there kind of sight-unseen. We’re still not sure what we’re doing there.

AD: So you’ve lived in every corner of the US and even spent some time in Canada and you’ve never really felt settled?

Richard Buckner: Not really. I guess since I grew up in the Central Valley, the delta part of California, that sort of feels like home, but I can’t afford to live there.

Richard Buckner: Yeah. Different stuff. I was driving a forklift in a warehouse for a while. Before that I was holding a road sign for Con Ed in while they were working on the power lines in the Upstate. January in the Catskills with snow banks and dead deer next to me. I worked for the census last year. Before that I was working at a school for autistic kids. So, wherever will take a freaky longhair who hasn’t had a real job in years.

AD: So many people hold you in such high regard as an artist, it’s tough to sort of justify that with the your reality of working these crappy jobs to get by. How do you see yourself?

Richard Buckner: It’s funny because I remember when I was holding the road sign for Con Ed it was, like, zero degrees and you’re in your thermals and had your hand-warmers but you could really only be out there for forty-five minutes or an hour and then they’d let you go sit in your car and warm up. And I was sitting there one day and listening to NPR and they were doing a story on the Berlin Film Festival and that film had come out with that soundtrack and I’m like, “My god, they’re talking about my film score on NPR and here I am out holding a sign in the snow next to a frozen animal carcass.”

AD: So life as professional singer-songwriter in America in 2011 is…

Richard Buckner: Really rough. Not only are there fewer labels and fewer booking agents, but people are just sharing files and not buying records anymore, and people aren’t going out as much anymore–or when they do they’re not buying as many drinks at the club. So everyone is affected. It‘s more of a struggle than it was when I first started. The whole, sort of, paying musicians thing still hasn’t been figured out. The same thing is happening to the book industry now. They just haven’t figured out how to pay artists for their work, how to restructure the system. So it’s difficult on a lot of levels, but that makes people more inventive in a lot of ways, too. Like last year I did some house concerts with a guy named Will Johnson [of Centro-matic and South San Gabriel]. So there are alternatives, but you have to keep thinking. The only money comes from touring. There’s no money in making records. This latest record that I’ve recorded I did entirely at my house. I would have loved to gone into the studio and bring a band in there like I did in the beginning but it’s just not possible anymore.

AD: And you typically tour solo or with just one other musician, rather than with a full band. Is that a purely financial decision, or at least partly artistic?

Richard Buckner: Well, I tour in my pickup and I can only fit one guy in there. But I’ve done a couple of band tours that were disasters on a bunch of levels. The kind of money clubs pay me, I can’t afford to bring a band out. I’m not going to pay somebody $50 a day–you can’t live on that. I just ate at Waffle House and it was, like, $9 or $10 for a meal. They should pay you that for eating there [laughs]. But it’s like prices are up everywhere except for musicians. The same clubs are paying me the same amount of money for a gig as I was making sixteen years ago. Still, I feel lucky in a lot of ways in that I can tour for a while and then not have to work for six months, where some people you see are stuck in the same shitty job for life.

AD: So what’s your definition of success?

Richard Buckner: I’m still alive. I can still pay my bills. And I have a label. I have a load of very talented musician friends who don’t have a label and I can’t understand why I do and they don’t. I got lucky with Merge. They’re honest. Most of they labels I’ve been with aren’t honest. You can’t get your statements, you can’t get paid, they disappear…If you really want to meet a bunch of fucking scumbags, be a musician. But Merge is just straight up and they’re the sweetest people. You want talk about success: If I have a label that I can trust and they’re nice and they care, then I’m the luckiest guy in the world.

AD: Your next record, Our Blood, is out on Merge August 2nd. Any particular inspirations for it?

Richard Buckner: It’s kind of a long story, but in the last three or four years things around me happened, and I’m talking mostly about people, friends and family, dying or going crazy or disappearing for various reasons. The songs have a thread through them that I haven’t really been able to explain to myself yet. Writing’s so prophetic. You never realize what they’re really about until years later. words/ j kress