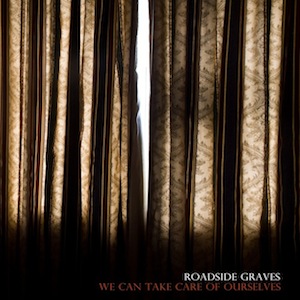 There are two broad views you can take of Roadside Graves latest, We Can’t Take Care of Ourselves: As the concept album that it is, inspired by the S.E. Hinton classic The Outsiders, or as a mark of maturation in the band’s work, musical styling distinct of thematic impulses. Though The Outsiders concept will certainly receive the most attention from listeners and reviews (probably even this one), inspiration is just that–a feeling, an idea, a mental state elevated to a different consciousness by some external force. Inspiration is hugely significant. But at the end of it all, it only offers ideas, it doesn’t execute on them. That’s why this latest piece from the Graves displays their maturity as much as, or even more than, their inspiration. But seeing as how this is one review, and both elements need to be discussed, we’ll take the broadest view: This is one hell of a concept album, precisely because it also isn’t a concept album, and it takes a fairly mature band to be able to expand their sound and pull a logical impossibility like that.

To even consider a concept album, one would assume many hesitations must be confronted. Primary among them: Are we limiting the scope of what we can produce? Do the boundaries of the concept inhibit exploration? Hard to wander in a corral, after all. To derive influence from a work like The Outsiders, it’s not simply that there are boundaries, but that the acreage therein has been pretty fully developed–to the point that you know what it is we’re talking about almost without explanation, to the point where it’s required reading for a large share of adolescent America, to the point where C. Thomas Howell actually has a legitimate credit to his name out of its film adaptation. (No disrespect to Soul Man intended.) On the other hand, its themes are so universal that they render nearly limitless bounty for examination and inspiration. S.E. Hinton’s depiction of Greasers and Socs is so much more than Greasers and Socs that it’s everybody–it’s you and it’s me and, yes, it’s even C. Thomas Howell.

The Outsiders shows adolescence for what it is–such a deep period of intense confusion, where we think we know who we are and who they are, who our friends are and who our enemies are, and what this all is. It’s the confusion of confidence, of false knowing. Basic uncertainty is easy–never knowing a “truth,” seeing two options, not knowing which is correct. But when we think we’ve firmly identified our station in life, any indication to the contrary–a Cherry Valance or a murder or a Robert Frost poem–throws that certainty into upheaval, a shocking adultery that brings our entire commitment into question.

This is where the Roadside Graves’ journey begins, with “Outside.” The album opener is already confronting realization. “Lookin’ for me, you better look outside,” they sing, and our subject isn’t shackled by false knowing. Instead, he’s in the early stages of finding himself, at the onset of the search, of overcoming confusion. Thematically, this is a tight kinship to the novel, but musically, we see our first taste (of many) of the new Roadside Graves. For those familiar, John Gleason is the primary vocal force of the band. Others join in, but nearly always in support. Here, Jeremy Benson’s voice gains prominence, and Gleason, possibly for the first time, serves as the lining. While they sing in tandem, Gleason’s voice takes a subtle backseat, like an echoing thought. It’s like how when we speak, we hear our fully conceived words externalized and delivered simultaneously alongside our inside voice, the sound inside our head that’s giving thought to our words. They have distinct characteristics, yet we can barely distinguish them, even when we focus on them. This is the sound of trying to figure it out.

Such implicit nods aren’t merely lyrical or vocal. In “Hospital,” we’re hearing the sonic equivalent of Johnny waiting to die, Ponyboy waiting for it to happen, the hospital itself looming above as it seems to when you enter. It’s at turns ominous and revelatory, creating a tension across nearly five minutes of wordless keys. It’s a rare instrumental song for the Graves, with the equally rare use of a synthesizer offering an absolutely necessary element to the song–the rise of some sort of angel (or decision or outcome) in waiting, equally dark and light, ambiguous as it is. And here again, the band adheres to the conceptual, while showing the flourishes of growth in their sound. That is, you haven’t previously heard a song like “Hospital” in the Roadside Graves catalog.

Allusive and expansive, these moments are everywhere. “Double Feature” is an undeniable take on the drive-in where Ponyboy and crew meet Cherry and Marcia, an integral turn in the narrative. “There’s a line that separates what’s bad and good,” they say, later declaring, “I don’t want to fight, but I will.” And you hear the doubt as that separation line blurs.

Similarly, “Waiting” is a marvelous folk exposition of Ponyboy and Johnny’s time in the church: “We can read books by the light of a match, for awhile, for awhile / Watch the hills go from gold to black, for awhile, for awhile.” The band has previously created moments of isolation, as with the title track from My Son’s Home. But before, they made songs spare on theme by making them spare in sound. Here, that landscape is filled in, the band is experienced enough to create a thick wall of sound without overpopulating the quietest of moments, the quiet of “waiting.”

The curtain call “All Over the World,” a sort of tuneful early-‘60s inspired ditty, has a clear influence from The Outsiders’ period, but you’ll find it’s nearly the only one amidst more modern sounds, like “Hospital,” or vintage RG anthems, like “Hank Williams.” This is an important decision on the band’s part. Had they made, in effect, a period piece–through sound or over-reliance on direct references–they would’ve built the boundaries of “concept” that much more tightly around them. They would’ve limited their scope, made caricature of the novel, and told its story, specifically, not the story of growing, universally. And that’s why this is the concept album that isn’t. If you’ve read The Outsiders, then you’ll get it. If you haven’t, then you’ll get it. And that’s why we’ve seen the band mature. They’ve shifted strokes of their musical approach to tell the story they’ve been inspired to tell, but one that is theirs. Or maybe everybody’s.

9 thoughts on “Roadside Graves :: We Can Take Care Of Ourselves”