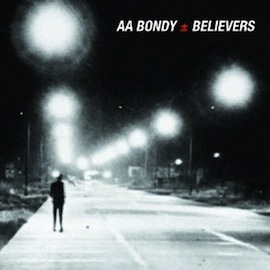 There’s a guitar tone that opens A.A. Bondy’s third album Believers like someone ringing strings at the bridge of the guitar. It fades as “The Heart Is Willing”‘s metronome drums and main guitar line come in, but that momentary disorientation, like an alarm bell ringing softly in the middle distance, echoes the record’s sense of numbing disorientation. This is an autumn album; not the early autumn of bright leaves and blue skies, but the late autumn of bare limbs and shivering nights.

Believers is a contradictory record. It doesn’t immediately grab the ears the way key moments of Bondy’s prior two solo outings did. But Believers is also his most consistent and well constructed album to date. It works best as a whole, each track building on a feeling that finds its echo in the next. Where certain songs seem to lose Bondy’s vocals amidst the cold, others raise him above the muted fray. “Down in the Fire (Lost Sea)” does the former, pushing the vocals down below a tedious and tired drum beat. “Hiway/Fevers” does the latter, soft waves of organ creating a feeling of being lost at sea – a dead highway amidst fever dreams. But the album reaches an unusual climax in “The Twist,” a throbbing song that places its narrator “in ritual position…far away from the world.” A song title that would normally mean dance floors and good times becomes something between an ironic turn of events and a death throe.

For an album with such a stark mood, Believers has an album title that evokes something different. A usually positive word comes to represent people who have invested too much in something to let go. The album’s black and white cover photo – a lone man walking along an empty road with rows of highway lights above him – its title and even the font of the song listing on the back of the album are reminiscent of Bruce Springsteen’s Nebraska. Believers is like the negative image of that classic – instead of reasons to believe, these are people who only found a side of the highway to walk along, following a set of lights that they cannot reach.   words/ j neas