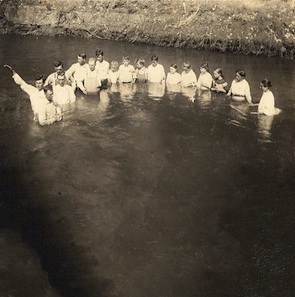 You’ve heard mention of the “Heart of the South” aplenty. It’s something of a regional reference point, the geographic central organ of whatever context in which it’s breathed. It can simultaneously be the Georgia Piedmont and the Mississippi Delta. Maybe it’s where those hillbillies dwell up near the Great Smokies in the Appalachian Plateau. Just depends. On what you’re reading. Or seeing. Or listening to. On where that story happens to live. The Heart of the South can be anyplace, which basically means it’s every place. And if it’s every place, then maybe it ain’t a place at all. Maybe it’s a secret or an idea or some other intangible thing, cloistered away in the innermost chamber of the indigenous spirit. May very well be a birthright, that. Protected, localized, impossibly extracted or replicated by outsiders. We see it and hear it and feel it because those who can access it choose or feel compelled to tell it, in whatever version is theirs.

We don’t know what compelled Stephen Weibelt and Chris Johnson to build a makeshift studio in a makeshift shed in Leeds, Alabama — a state, as it were, that bills itself as the Heart of Dixie — and make music. But they did. As Colossal Gospel, the duo quietly and nearly anonymously recorded the songs that would become “Circles,” their debut LP. If psych-folk is LSD around a bonfire, “Circles” is a low dose of mushrooms on the front porch; a folkloric nu-gospel trip that pulses with the humid breath of a trueborn southern narrative.

In Colossal Gospel’s telling, the story is a sort of grounded fairytale, magic realism, maybe that meta-world that lives just beyond the margins, which prayers or thoughts seek to find. It’s twilight more than dark, a touch (or three) merrier than the sweaty Southern Gothic macabre of its forebears. But it does pass under their looming, languid branches from time to time.

In “Leaving,” we enter. The opener might mislead that a relationship flourishes with hand-clapping buoyancy, but the refrain admits more. “Stay by my side until the morning / Because in the morning, I am leaving,” he says. And suddenly we see a couple with strides out of step. Ever present are the “hills” in the distance, sometimes abloom, once in decline, a shifting landscape representative of a life much the same.

What follows is maybe what the opener’s subject becomes, an “Observer and Creature,” who yearns to be where the “insects and arachnids nests convene to worship,” out somewhere in the tall grass, the belly of his beast, his “temple’s cavity.” And we hear the first of the lingering thought, the practice of patience in Colossal Gospel’s delivery.

It’s incredible restraint that can hold a story back before it’s ready to unfold — just as a punchline delivered without the beat is ruined, or a comma’s absence can set a sentence on forever. And Colossal Gospel do it to great effect, holding on single words — “Enough” in “Observer and Creature” — and dragging on phrases — “So will you go?” in “Leaving” — to let them be what they’re meant to be, to speak their intent. Restraint is also seen in full verse.

One of the stronger — and most representative — testaments arrives at the midway point. “Bloody Boat” drifts with the rhythmic perpetuity of a rower working against the simple force of still water, the boat’s bow cutting a wake that laps almost silently against the hull. Despite the hymnal’s trance-like endlessness across the nethermarsh into some afterlife, it’s actually the shortest song on the record. But the patient delivery leaves you in an unaware forever, until the silent end pulls you back to.

That could be said for the album entire, a cadenced collection that beats back and forth until the last song calls you awake. That broad harmony is effected through a call-and-response of tunes: “Leaving” to the penultimate “Comin’ Home;” “Observer and Creature,” whose verse is partially recollected in “Afterword (All I Am);” the death rites of “River Return Me” read two songs after “Bloody Boat.” There’s a “Bitter Man” and a “Bitter Woman,” each contemplative, but she being one of the deepest experiences on the album.

Amidst all of them stands “I Have Heart, I Have a Heart.” It has no counter-song, no response. The duality is within itself, where the heart is both a spirit and the thrum of a beating organ that sends the intangible physically through us, tingling to the end, until both end. The song hangs sublimely aloft with biblical allusion and self-assurances — “I am brave,” “I am strong,” “I am wise,” “I am right” — that suggest resignation more than confidence when it’s all said and done. And though it arrives three songs into “Circles,” it wanders like a post-existential appraisal of things. It’s the coming down and letting go after a final grasp at definition. But what can truly be defined when life is a series of questions, answered only by questions? What can be said aside from having survived it all, lived it all. What can be done other than convince yourself that all along you’d been brave and strong and wise and right, even as those declarations hit with the falling intonation of questions that can’t be answered with “yes” or “no.” Maybe that can’t be answered at all. When all it ever was, ever is, is the search for what and where the heart is. words/ j crosby

One thought on “Colossal Gospel :: Circles”