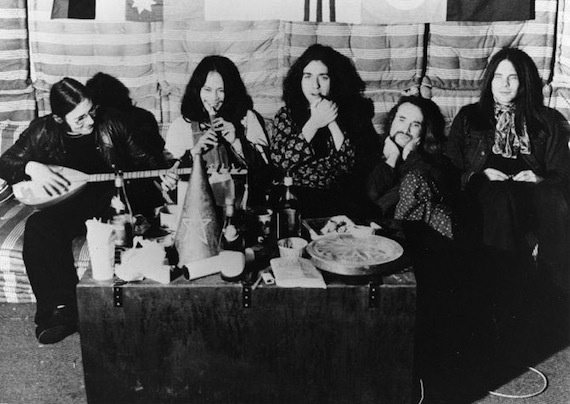 There are those among us who will shudder when I say this, but let’s face facts: Can was a jam band. Indeed, jamming was at the heart of pretty much everything the legendary krautrockers did. Rather than a group centered around a songwriter, Can was a collective of improvisers whose primary modus operandi in the studio was — not unlike Miles Davis’ and Teo Macero’s approach in the 1970s — to play freely as the tape rolled, and then, later, edit the best bits together. This mix of spontaneous interplay and after-the-fact composition is one of the keys to the success of their well-nigh unparalleled run of LPs form the late 60s to the mid 70s.

But onstage, spontaneity ruled. For example: the massive, 24-minute “Chain Reaction” which kicks off this recording of Can live in the UK in 1975. It’s a mess, but it’s a glorious mess. At times it calls to mind the O-mind malevolence of “Sister Ray;” at others it’s almost as if the rhythm section of Holger Czukay and Jaki Liebezeit are about to break into the most cosmic disco groove of all time. [Actually, they might finally hit that groove a little later, during “Dizzy Dizzy.”] The players definitely don’t know quite where the fuck they’re going for large chunks of the set, but they do know they’re going there together, whether off a cliff or straight into paradise. Dig the luminous drift of the Future Days magnum opus “Bel Air,” as guitarist Michael Karoli layers dream-like dub vibes over Irmin Schmidt’s majestic synths. Or the mindbending moment when the band finds its way into the iconic “Mother Sky” somewhere in the midst of “Pinch,” leaning into the riff as though their lives depend on it. Vocalist Damo Suzuki is a light presence on this recording, stepping back to let the instrumentalists do most of the heavy lifting. But you can feel his whirling Dervish presence throughout. How about we all whirl with him? words/ t wilcox