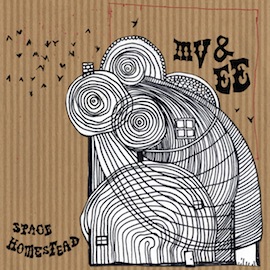 MV & EE do not deal in folk, blues, psych, or country so much as they distill and modify these influences and render them anew. The duo’s music, like the work of Daevid Allen or Dead Moon, is only accurately described in relation to itself. Valentine and Elder proudly acknowledge their forebears, but their distinct brand of cosmic American music remains as singular as it is panoptic.

“Sweet Sure Gone” is a cosmopolitan country blues, featuring Valentine’s heavily affected vocals like scrambled CB transmissions from a weigh station just outside East Hill Farm. “Shit’s Creek,” a live staple that occasionally sprawls north of ten minutes, is presented here as a brief acoustic vignette reminiscent of Al Wilson’s widely-bootlegged sickbed blues testimonies. Elsewhere, the woozy “Common Ground” recasts the first Galaxie 500 album as a Lee Perry production, while the narcoleptic noir of “Too Far To See” conjures a menacing atmosphere with an ominous riff and a gate-crashing guitar solo. “Wasteland” is the album’s highlight, a blasted lament that provides evidence as to why younger bands like Woods regard Valentine as a spiritual and sonic godfather. Twelve-string guitar, hollow body bass plucking, and lovely unison vocals sit alongside babbling brook wah guitar, assertive rock and roll drums, and a screaming lead, making for one of the most affirming and triumphant-sounding numbers about ‘wasting away’ this side of anything by the Velvets. Throughout, Elder’s guitar ululations and environmental vocals imbue each moment with stoned atmosphere, like slow-moving shuttles patrolling the abyss. If Space Homestead has a single flaw, it is a conspicuous absence of tunes prominently featuring her lead vocals.

Even at its most impressionistic and reflective, the album lacks the purist clichés and tedious longueurs of fundamentalist psychedelia. From the employment of different combinations of musicians on each track to the somewhat unfashionable practice of writing sharp, memorable songs, MV & EE’s community music is the essence of pure populism. It proposes adventure, not escapism; introspection, not indulgence; magic, not tricks. words/ j jackson toth