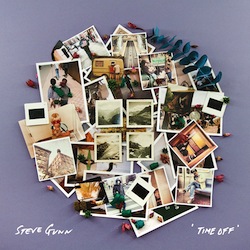 As one of Kurt Vile’s deputized Violators, Steve Gunn has already had an eventful 2013, appearing on various late night TV shows and playing to the assembled hordes at major music festivals. But his crowning achievement this year is undoubtedly Time Off, an instant classic if ever there was one.

The album neatly ties together two strands of Gunn’s previous work — the expansive, improvisatory guitar-drum jams of the Gunn-Truscinksi Duo and the more song-based approach of 2009’s masterful Boerum Palace. The guitarist leads his rhythm section (John Truscinski on drums and Justin Tripp on bass) through a set of tunes that nod in the direction of the Grateful Dead, JJ Cale, and Neil Young without feeling remotely retro. The interplay here is marvelous; Truscinksi and Tripp can choogle like nobody’s business, but with the lightness and dynamics of jazz players, leaving Gunn free to weave intricate webs of layered acoustic and electric guitars. The album rocks, to be sure, but never relies on volume for its inherent heaviness. Dig the beautiful ebb and flow of its majestic opener, “Water Wheel,” the deep boogie of “New Decline,” or the hypnotic churn of “Trailways Rambler.” Time Off captures a musician at the top of his game. Gunn’s aim is true. words/ t wilcox