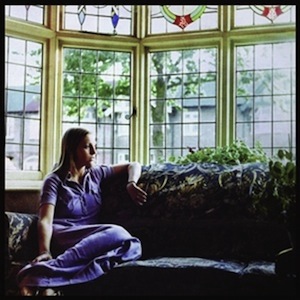 “Obscure” isn’t the word to describe British psych band Dark’s 1972 LP Dark Round the Edges. Recorded at S.I.S. Recording Studio LTD in Northhampton, the record’s private press run was less than meager. Only about 50 copies were ever pressed, the bill footed by guitarist/vocalist/songwriter Steven Giles. But the album’s legend grew as decades passed, as heads and collectors caught wind of the lost fuzz-guitar classic, its sleeve featuring a model posed stoically on a floral-printed couch, like an American Apparel ad 30 years too early.

So good on Machu Picchu, LTD, a small label out of Portland, Oregon, for not only making the bewitching sounds of Dark Round the Edges available, but taking things a just step further, enlisting Warren Defever to remaster the record, pressing it to high quality vinyl and contacting Giles, bassist Ron Johnson and drummer Clive Thorneycroft to officially license the record and compile exhaustive liner notes. This release is no charming bootleg; it’s a full-scale tribute to an album that captures the perfect English weirdness of the moldy English basements where it was born.

Though there are antecedents to Dark’s sound — think Cream or Jefferson Airplane at their haziest — there’s something singular about Dark. Opener “Darkside” is lithe but muscular, and like early Sabbath, there’s a jazziness to it that suggests an alternate universe where Impulse put out the first heavy metal records. “Maypole” and “Live for Today” alternately sway gently and twist-and-turn into fuzz-blues rockers. The record isn’t without a dose of necessary humor, either. The proggy workout of “R.C.8” features goofy sound effects (bells ringing and toilets flushing) that indicate that for all the record’s intricate mysticism, these were working class dudes having fun. The brisk tempo of “The Cat” illustrates it, too. With its (comparatively) flashing solos and funky backbeat, it wouldn’t sound out of place in the repertoire of a well-tended bar band. The band shifts into lower gear for a few expressive moments before ramping right back up as the band crashes into the riff-heavy “Zero Time,” as ominous as anything Deep Purple ever put to tape.

Considering the records that major labels did put out in the ‘70s, it’s hard to say why Dark didn’t get a deal, but it’s not hard to see why the record’s myth has grown exponentially. Giles and Co. did reunite for a stint in the ‘90s, recording a second album called Anonymous Days. It didn’t catch either, but Ross promises in the liner notes: “But this’ll become a collector’s item as well, just you watch. Come back in 20 years’ time.” If the curious trajectory of Dark Round the Edges is any indicator, he might be on to something. words/ j woodbury

3 thoughts on “Dark :: Dark Round the Edges”