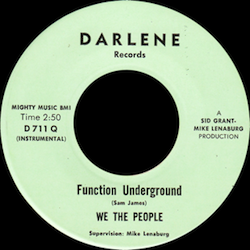 Though Arizona’s most popular soul export is Dyke and the Blazers’ “Funky Broadway” — not written about NYC, but rather Arlester “Dyke” Christian’s memories of Broadway in Buffalo, New York, and the Broadway Road’s role in the burgeoning late-sixties R&B scene in Phoenix — no figure in the state’s soul history casts a wider shadow than “Mighty” Mike Lenaburg. A concert promoter, disc jockey, producer, manager (he handled Little Richard and Ike & Tina Turn on the road), songwriter, and owner of several renowned record labels, Lenaburg’s songs and the records he issued rank among the grittiest, most forcefully funky examples of the psychedelic soul genre. Though he wasn’t a performer himself, We the People’s 1971 single on Darlene Records, “People Open Your Eyes & See” b/w “Function Underground,” stands as one of his dirtiest garage funk workouts. Both recordings are featured on one of the comprehensive collections of Phoenix soul, Numero Group’s 2006 Eccentric Soul: Migthy Mike Lenaburg, along with other triumphs by Michael Liggins, Lon Rogers and the Soul Blenders, Ronnie Whitehead, and more. Produced by Lenaburg, We the People’s horns compete to out-fuzz the distorted Hendrix-style guitars. Phoenix’s soul tradition isn’t as storied as Detroit or Memphis, but the sandblasted grooves of We the People and other Lenaburg acts suggest a whole different world than those cities. words / j woodbury

We The People :: Function Underground

3 thoughts on “We The People :: Function Underground”