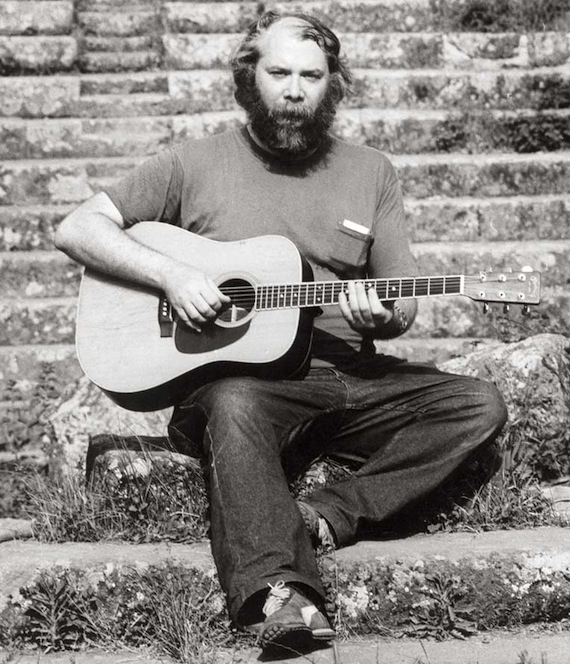 In his new book, Dance of Death: The Life of John Fahey, American Guitarist, author Steve Lowenthal cites a review of John Fahey’s performance at Hunter College in New York by the Village Voice’s Paul Nelson in 1975:

“His guitar-playing is a deliberate mixture of psychology, order, mythology, poetry, and genre–all very exact, with the meaning entirely between the lines. Part of our fine national school of minimal acting, glints of feeling shining through the stoic, awesome professionalism that is characteristic of the American hero, John Fahey seems to me to be the Clint Eastwood/Steve McQueen of the guitar. I’d hate to meet him in a dark alley. He didn’t even say goodbye.”

Like those hardboiled actors, Fahey was a distinctly American artist, one whose work was born from violence — mental, spiritual, and often physical — a divided nature, religious pondering, and angst. The passage fails to capture the whole sum of the man, but it gets close. Glenn Jones, solo guitarist, founder of experimental outfit Cul de Sac, a friend and collaborator of Fahey’s, says that Dance of Death functions in a similar fashion.

“He was such a huge and influential person. His personality was so outsized,” Jones explains. “It wasn’t just his music, it was the way he thought. He kind of questioned everything. Nothing was assumed. I knew him for 25 years, and for those of us who did, no book is going to be able to create the kind of three-dimensional living, breathing man we knew…but I think [Lowenthal] did an incredible amount of research.”

Drawing from years of research and interviews with Fahey’s family, business associates, and friends, including information drawn from Jones’ “Fahey files” and interviews, Lowenthal sketches a portrait that is as troubling as it is inspiring.

“One of the things I like in Steve’s book is that he doesn’t try and present him as a loveable, cuddly Santa Claus-type figure,” Jones says. Fahey’s brilliance is made clear throughout the book, but so are his struggles: his own self-hatred, mental issues that plagued him all his life, battles with both the bottle and prescription pills, misogyny, and a tendency toward cruelty, prone to say terrible things — sometimes racist in nature– to get a rise out of his targets.

“John was very complicated,” Jones says. “He was stupid, he had his own prejudices, he did things that he was very much ashamed of later on. When John talked about behavior, he always talked about ethics, and he didn’t believe that he had acted in an ethical way. But part of his ethics was that however much there were things about himself he didn’t like, he was honest about them. I don’t think he would have respected any biography about him that didn’t come to terms with his own weirdnesses… I’m glad that Steve wrestled with all those aspects. It’s not necessarily a pretty picture that emerges, but it attempts to be an honest one.”

For all of the ink devoted to Fahey’s capacity for ugliness, Dance of Death is also harrowingly funny. Lowenthal pieces together the account of Fahey’s dustup with Italian director Michelangelo Antonioni, and a story concerning female members of the Manson Family stopping by to shop their record to the Takoma staff (and leaving only after they’d infected everyone but Fahey with gonorrhea). It also details a work ethic that matches Fahey’s oversized personality.

“I think that it’s a good picture of the person John was,” Jones says. “It’s very sobering. I turned 60 last year, and Fahey died at age 61. When I compare my life to his, here is a guy who recorded 40 albums and enough stuff for several more besides. He participated in the rediscovery of Bukka White and Skip James. He started two labels, one of which was the first artist-owned labels ever, and one of the most successful independent labels of its day. He started the careers of Leo Kottke, Peter Lang, Al Wilson, George Wintson, any number of less famous people. He wrote four books, contributed liner notes to many, many records. He canvassed for records throughout the South, did field recordings, looked for people who recorded those 78s, lived on two coasts and Hawaii, was married and divorced three times. That’s an incredible life. When I read in some of John’s old letters — there’s one letter where he says ‘I haven’t done much this year, I feel like I haven’t accomplished much,’ I just shake my head. I don’t know how he had the hours in his life to do the things he did.”

Since his death in 2001, Fahey’s shadow has loomed over the whole of solo guitarists, to the point that Fahey comparisons can often be the result of “laziness” on the part of music writers, Jones says. “If you pick up an acoustic guitar at all, someone mentions John Fahey,” Jones says. But Fahey’s work is elemental, too, and undeniable. “Fahey was the first person to create an audience for steel-guitar music, without vocals. In that way he’s hugely influential, even for people who might not know he influenced them. By creating a market for it, in the same way that Segovia created a market for classical guitar music in the ‘20s.”

And Jones still hears new things in his collection of Fahey record, even after decades of listening to them. Lowenthal’s Dance of Death examines an artist capable of such longevity, a man whose demons sought to derail his art, but more often ended up creating fuel for it.

“He’s as influential now, maybe even more so as both a musician and a thinker, as he was in his prime,” Jones says. “His stature just grows.”

Glenn Jones will perform a set alongside a reading by Steve Lowenthal, introduction by Rolling Stone’s David Fricke, and DJ set by John Fell Ryan tonight, June 3, at the Ace Hotel in New York.

He’ll join Lowenthal for tour stops June 4 at the Philadelphia Record Exchange in Philadelphia, June 5 at Midtown Scholar Bookstore in Harrisburg, and June 8 at the Wind-Up Space in Baltimore. He’ll perform solo on June 7 at the Issue Project Room in Brooklyn.

7 thoughts on “Dance of Death: The Life of John Fahey, American Guitarist”