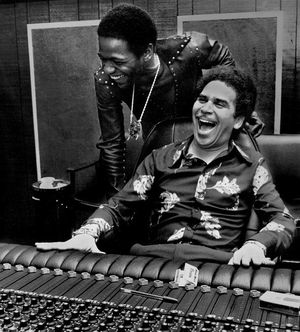 There are those songs that come into the studio to be revamped, polished, and preened, and then there are those songs that enter, rough and tumble, and utilize the momentum. It’s there in the introductions mostly, this ability of a song to reveal itself as a production. You hear it taking place, pre-performance, and suddenly you’re in amidst the equipment and the mixing board. Everything’s a mess and everything’s about to come together. More importantly, you’re being reminded (sometimes intentionally, sometimes not) that, yes, this is recording, this is something being made for you to listen to.

The classic case (although other classic moments can surely be found on many a jazz and ‘field’ recording) is ‘Bob Dylan’s 115th Dream’, when everything breaks down a few measures in. Mildly-high guffaws break out, Take One becomes Take Two, and the band–nudged alert by Mike Bloomfield’s guitar cue–nails it with a fiery-ness that’s always just a little unexpected. We’ve all heard it before, but what’s harder to imagine, maybe, is how we might feel had Take 1 had simply been a ‘master’ take, what vitality might be lost were we left out of the studio, rather than being invited in. A decision was made, after all, to leave this false-start ‘on the record’.

Of course it’s not that uncommon, this Brechtian breaking of frame (and, obviously, it has to do with far more than D-I-Y aesthetics). You hear it on blues albums, on folk albums, on prog-rock and hip-hop.   But no matter what the context, it always seems to add an additional energy and volatility to whatever is taking place–as if everything could fall apart were it not for the impromptu talents of musicians and producers alike, of people trying to play together and get it right.

Take Al Green’s recording of ‘I Want to Hold Your Hand’. What could easily have been generic Beatlemania filler for Green’s debut album is instead turned into a two-minute bottle-rocket soul recording, an Al Green recording. We hear the man himself shadowboxing his way through the preparations, raring to go, egging the band on. ‘We got the feeling now,’ he says, before yelping it out again, giddily. We’re being placed somewhere in between James Brown’s theatrical introduction to ‘Sex Machine’ and the nervous peal of feedback that opens The Beatles’ ‘I Feel Fine’. ‘Shut up, Al Green,’ says a voice from the control box, but Al Green is already in full flight. You couldn’t shut him up anymore than you could Little Richard. And because we know where he’s at, we can hear him own this song, turning hand-holding into a euphemism for anything but. His delivery dances around the previously straightforward melody, finding inflections in it that hardly seem possible. (Wait, this was a Beatles song, you say?) He even changes the lyrics, as if to let them say what they were always trying to say: ‘It’s such a feeling that, my love/I get I high/I get high/I get high.’

Al Green :: I Want To Hold Your Hand

The studio/party atmosphere is also used to great effect in Van Morrison’s pre-Astral Weeks run-through of ‘Madame George’ with a bunch of New York studio musicians. (These were the very same Bang Records sessions, in fact, that produced both the comparatively twee ‘Brown Eyed Girl’ and the unforgettably Dickensian blues of ‘T.B. Sheets’). ‘Put yer fur boots on,’ suggests Morrison’s Belfast brogue at the song’s opening. It’s not something he lets loose very often–I mean, try to find that accent on Moondance or Tupelo Honey. The response from the mixing desk this time is ‘Why don’t you mind your own business?’ Everyone in the room is carousing, What’s Going On-like, in and around the song. The session band, meanwhile, try their best to locate the groove in a song about midnight drug raids and hanging with an attractive transvestite (‘And suddenly you’re up against the bathroom door/The hallway lights are finely getting dim/You’re in the front row touching him’). Hugh McCracken’s silvery guitar showboats flirtatiously around the band and the back-up singers. Everyone is hanging out and someone, somewhere is playing a triangle. You have to wonder, is anyone really listening to what they’re committing to tape here? It’s hard not to picture Morrison seated, at the feet of this tightly-knit crowd, strumming away, talking about a time and place no one else really knows or cares about, attempting to re-capture something he just can’t (not without muted strings, not without a double bass, not without emptying the room). But, on a thematic level, it works: the studio we hear is all smoke and dive bar atmosphere, and it’s appropriately here that we find Morrison lost and waxing nostalgic, another downhearted foreigner in a big city.

Other examples of this in-studio feeling vary widely in effect. Compare, for instance, David Bowie’s musique concrete introduction to ‘Andy Warhol’ to the snatches of studio banter on The Pixies’ Surfer Rosa or to the Beach Boys’ mid-song conversations about cameras on ‘Here Today’. Compare the dark-sad reality of Syd Barrett’s mumbling on The Madcap Laughs to Sonny Boy Williamson’s chastising of Leonard Chess on the recording of ‘Little Village’. Compare Ringo’s screaming that he has blisters on his fingers at the end of ‘Helter Skelter’  to the outdoorsy calm of Heron’s Heron (‘I’ve got little black things crawling all over me’).

What connects all these recordings is the way in which they present themselves as recordings and not just songs. They bring you into the very moment in time at which this art is taking place and say that you, the listener, are just as much a participant in the process. You too can share in the artistry of that recorded moment. When everyone is asked to ‘let me know when you’re ready,’ at the top of Junior Well’s garage-band-meets-Chicago-blues of ‘We’re Ready’, this includes you as well. In other words: brace yourself. words / dk o’hara