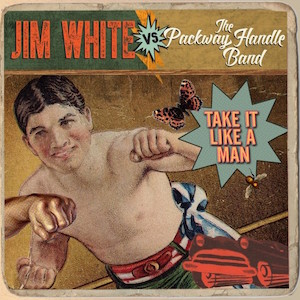 Jim White once told me that his ideal situation as a songwriter would be to make a record of other people recording his songs. And given the bits of himself that have leaked out through his six full-length albums, it’s not surprising to think of him being the introvert, of wanting to share his ideas, but perhaps not through his own voice on his own stage. Thankfully, he never fully embraced that idea given how perfect his own spoken and sung voice is for his written words, but his newest album, Take It Like a Man, a collaboration with Athens, Georgia’s Packway Handle Band, is a good example of how his sought anonymity within the music could generate amazing results.

This is not to say that this is not a Jim White record. His name appears above the title for a reason. His lead vocals, however, are restricted to only five of the 11 songs on the album. And that’s something to get used to. But the Packway Handle Band proves to be an amazing compliment to White’s music and lyrics.

Clocking in at less than 40 minutes, Take It Like a Man is a rambling chase. It comes up to speed through the mystical feel of “Smack Dab in a Big Tornado,” a song with imagery familiar to long-time fans of White’s work, hitting its first stride with “Corn Pone Refugee,” a song that relishes in its word play. “I could not help myself, tugging on them strings,” White sings with the gallop of Packway behind him both musically and vocally. What sounds in a lot of ways like a traditional bluegrass romp is transformed with White’s distinctive imagery and vocal delivery.

The album shines especially when it both revisits and re-imagines some of White’s earlier work. Two songs previously released are performed here. “Jim 3:16,” a version of which appeared on the 2009 live EP A Funny Little Cross to Bear, is fantastic in this setting, the refrain of “A bar is just a church where they serve beer,” having its simple truth underlined by the full instrumentation. Digging back even deeper to White’s first LP, “Wordmule Revisited” is exactly as the title proclaims, a re-examination of the Wrong-Eyed Jesus stand-out. Here, the original’s creaky, fractured production is straightened out into a jam that carries a hoarse sounding small-choir of voices. Where the original sounded like free association funneled through a filter of smiling insanity, the remake finds the song to be much more foreboding. Maybe it’s the more intense instrumentation – the Packway Handle Band is a ridiculously well oiled machine on this album – or the spoken lines among the sung that add to the menace. The overall feel is ratcheted up and it’s a tremendous song that stands on its own against the original’s broken brilliance.

Jim White And The Packway Handle Band :: Not A Song

But the album cements itself on its penultimate track, “Sorrows Shine.” The songs sounds like something that might have emerged from White’s previous album Where It Hits You, full of one White truism (“frameworks cripple minds”) after another (“We prayed the winter wind would blow our sins away / strange how we come to rest, yet here our troubles stay”). It’s the albums longest song, its most sorrowful and its most rewarding. While it may mark one of Packway’s most subdued moments on the album, it also is one of the most rewarding, their instrumentation rising and falling when necessary, train-whistle woodwinds evoking the loneliness you can feel in the middle of others. It’s a magnificent way to wind the album down and it sells its completeness, bringing home the restless wandering at its center. words / j neas