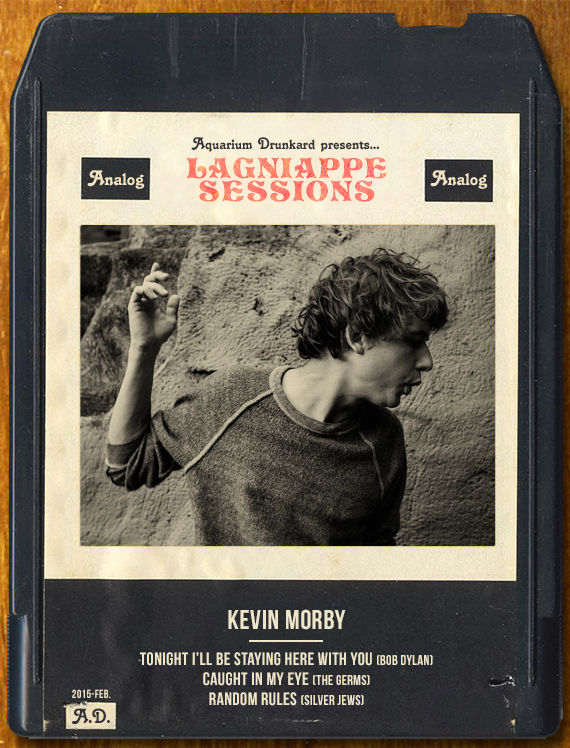 Kevin Morby’s week-long tour of the west coast with Jessica Pratt begins today, followed by an east coast tour in early March. Before he hit the road, Morby recorded three covers for the Lagniappe Sessions at his home in Mount Washington: Dylan, Silver Jews and a re-imagining / taming of The Germs’ “Caught In My Eye”. Morby, in his own words, below. . .

My girlfriend and I had our neighbors and friends Kyle and Amy over for dinner a few months ago. Kyle (King Tuff) was playing around on one of my guitars towards the end of the night (the dude knows how to play every song ever) and ended the night with “Tonight Ill Be Staying Here With You” by Bob Dylan. I had never heard this Dylan song before, which was surprising, because in case you can’t tell by listening to my own music – I’m obsessed with the guy. But it made sense, as the song is off of Nashville Skyline, an album that, for whatever reason, I had always had an aversion to. I also like to space my Dylan albums out as far as possible, and save them for a rainy month. Anyways, Kyle and my girlfriend scolded me for not knowing the song – or the album – all that well, and then they both forced me to listen to it over and over and now I’m of course obsessed. I recorded all these songs right after having woken up and sitting at my kitchen table right into my phone. I like singing first thing in the day, it gets the dirt in and out of the vocal chords. This one syncs up with the tea kettle starting to whistle.

Kevin Morby :: Caught In My Eye (The Germs)

About 6 or so years ago, one of my best friends (Johnny) told me it would be his dream come true for someone to reinterpret the Germs song “Caught In My Eye” onto acoustic guitar and try to make something pretty out of it. For some reason, at some point last year, I was taking a shower and suddenly remembered him saying that all those year ago, got out of the shower, looked up the lyrics, recorded it too a riff I had lying around and sent it to him. And wouldn’t y’know it? It was his birthday that day! I hadn’t even a clue. It was in the cosmos, I suppose. This song reads amazingly and I think that’s why Johnny wanted it reinterpreted – to highlight the poetry that is Darby Crash’s lyrics. Johnny, happy birthday forever.

We all know that “Random Rules” is one of the best songs off one of the best albums of all time. It’s a song that’s so simple it’s hard to tell exactly what is even so good about it – what makes it rise so far above other songs in the Silver Jews catalog. You put this record on and it just comes out swinging. That opening line “In 1984, I was hospitalized while approaching perfection”. Jesus. This is the first album that I ever got on vinyl (along with Bikini Kills Pussy Whipped), and it’s really stood the test of time with me. It’s one of my desert island records for sure, but even more so, this is one of my desert island songs. It’s a song I used to cover when I’d play solo shows in Kansas City at age 16, and it’s a song that most every time I try out a new guitar or am idly strumming one, I end up playing this chord progression without even thinking about it. I’m singing from memory here, I didn’t look up any lyrics, so there’s probably a few mistakes, but as far as I’m concerned this song is a folk song that can take whatever shape it wants. And like all great folk songs do, it will live on forever because the people will carry it. There are few songs I enjoy more than this one. Maybe only two. Think of it like this: If I was on death row, and had to pick a last song rather than a last meal, this would be the appetizer.