‘Eventually I would record an entire album based on Chekhov short stories–critics thought it was autobiographical…’  Chronicles: Volume I 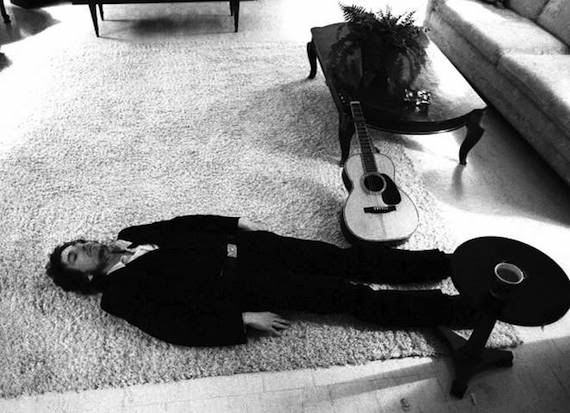 Meet Me in the Morning (Early Take)

The bloodletting began, fittingly, in a red notebook. Estranged from his wife at the time, living on a farm in Minnesota with his kids and his new girlfriend, he started filling up pages with story-laden imagery, thumbnail sketches that bled, one into another. The first to spill forth was the purgatorial Western of ‘Lily, Rosemary, and the Jack of Hearts,’ which appears in précis form in the notebook’s early pages, followed by ‘Tangled Up in Blue’ and then draft after draft of ‘Idiot Wind.’ About the latter, he later explained, ‘It wouldn’t stop. Where do you end? You could still be writing it, really. It’s something that could be a work continually in progress.’

Critics (and listeners too) tend to think of  Blood on the Tracks  as an excavation of Dylan’s own love life up to that time. The whole devastating break-up cliché just seems to chime so well with the mood and content of the music. Who cares if he was never a cook in the Great North Woods, or if Sara Dylan had never gone anywhere near Tangier, it’s all just a metaphor, one big allegory for the devastation he found himself surrounded by at the time. The key to the songs is that ‘he’ is only ever ‘Dylan’ and ‘she’ is only ever his wife or someone he slept with.

But to interpret the songs such a way, as if tracing a star map through the back roads of the songwriter’s life, is to do a disservice to the artistry of the storytelling.   Blood on the Tracks  is not a memoir, a confession, or even a  roman î  clef. What we encounter in these songs is layer upon layer of thematically-linked images, flicker-book fictions. Gone are the mythic Americana mash-ups of  Highway 61 Revisited. Gone are the elaborate opium dreams and surrealist backrooms of  Blonde on Blonde. What we get instead is a cast of couples and jilted lovers, their battered narratives composed of raggedy scraps–not biography. If these scenes are meant to correspond solely to Dylan and the various women in his life, then why did he bother with the artistic obfuscation, the multiplicity of perspectives? Why introduce the Man named Gray, the one-eyed undertaker, the roommates down on Montague Street? And why this determination to play Picasso with narrative?

Because, he said later, ‘I wanted to defy time, so that the story took place in the present and the past at the same time. When you look at a painting, you can see any part of it, or see all of it together.’ 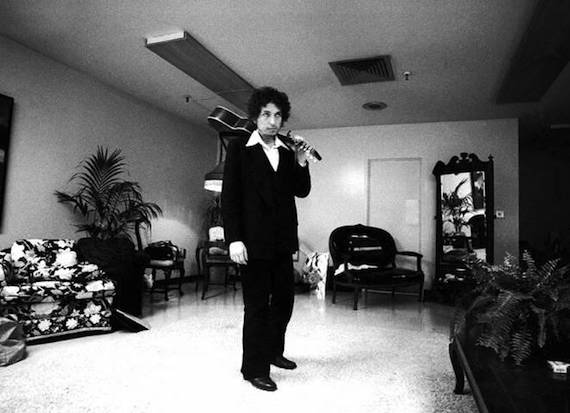 The catalyst for all this may well have been the dissolution of his marriage, or it may have been painting classes he’d been taking the year before and from which he’d returned with a fire in his head (‘I went home and my wife never did understand me ever since that day’). On a purely technical level, however, the thing that definitively flicked the switch from heartbreak to newfound creativity was a matter of tuning. Specifically open-E (or, to be even more specific, open-E tuned down a whole step to D). Mythology tells us that a post-Blue  Joni Mitchell taught this guitar tuning to him, although, if true, this would have to be qualified as  re-taught, since he’d used it extensively during the  Freewheelin’  sessions (see ‘Corrina, Corrina,’ ‘Oxford Town,’ ’I Shall Be Free’ etc.) What is undeniable is that, up to this point, he had never played in an open-tuning  like this: flicking his way through the chords, alternating bluesy slides up the neck and Everly Brothers changes with vaguely medieval harmonics.

In the months prior to recording, he went around, trying the songs out on different people. He played them to Shel Silverstein on a houseboat in Marin County; he played them to Stephen Stills in a Minneapolis hotel room after a CSN gig (according to Graham Nash, who was standing in the doorway, Stills’s verdict afterwards was ‘He’s a good songwriter, but he’s no musician’); at one stage, he even played them to some Hasidic friends in a backyard in Crown Heights, Brooklyn.   When he collared Mike Bloomfield, his foot was already tapping hyperactively, impatient to get the songs out. But Bloomfield (who’d been there onstage with him at Newport, who’d helped him turn ‘Like a Rolling Stone’ into what it was) was bewildered. It took the guitarist too long to realize he was being used more as a sounding board than a collaborator.

‘He came over and there was a whole lot of secrecy involved, there couldn’t be anybody in the house…He took out his guitar, tuned to open D tuning and he started playing the songs nonstop…He just did one after another and I got lost. They all began to sound the same to me, they were all in the same key, they were all long. I don’t know. It was one of the strangest experiences of my life. And it really hurt me…’

Lily, Rosemary, and the Jack of Hearts

This was a songwriter wanting less to polish his newly minted songs than to be rid of them. In the studio, he similarly kept his head down, ignoring everyone. The musicians he took with him into A&R Recording’s Studio A (the same studio at which he’d recorded his first six albums) ended up feeling just as alienated as Bloomfield. Made up of Eric Weissberg and the band that had played on the  Deliverance  soundtrack, these were top session men who knew how to follow a lead. But the performer in question was not offering any leads. No quick rehearsals, no chord charts. They couldn’t even follow his hands along the fret board because of the weird tuning he was using. Phil Ramone, the producer (despite claiming greater responsibility after the fact), basically had the mic-stands set up and hit record. If the buttons on Dylan’s jacket were click-clacking against his guitar through every take–and  he  didn’t seem to mind–then so be it. 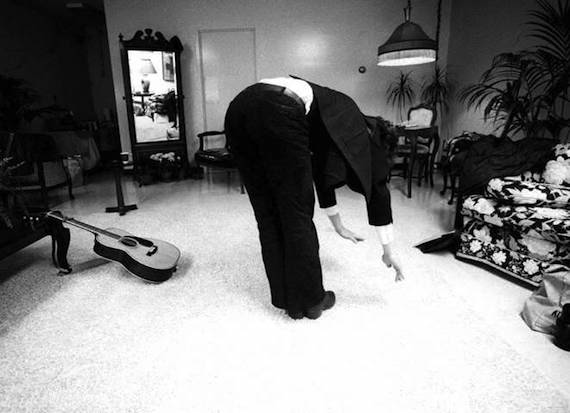 The New York Sessions of  Blood on the Tracks  were quick work, recorded over four inebriated nights in September of 1974. In the end, the drums and lead guitars were all dropped; after nailing down two tracks with a full band (‘Meet Me in the Morning’ and ‘Buckets of Rain’) the accompaniment would be reduced to just bass, some touches pedal steel and some overdubbed organ. On an album that thematically professed it was ‘doom alone that counts,’ minimalism seemed the obvious way forward.

Blood on the Tracks  is not an album about a relationship (not Dylan’s, not anybody’s), but an album about the brokenness inherent, ultimately, in all relationships. The tarot deck is stacked from the start, romance can only play itself out. Lovers just have to ‘keep on, keeping on’ as best they can. Even in a song about the breathless, flower-picking, high-point of love (‘You’re Gonna Make Me Lonesome When You Go’), the inevitable end of the affair still haunts the proceedings. Philosophically, we’re very much in that post-Watergate wasteland of paranoid, Marathon Men, everyone trying unsuccessfully to extricate themselves from pantomimes of intrigue and gossip. Here, the very idea of finding shelter from the storm is an archaism from another lifetime, remembered nostalgically. What else to see buckets of rain/buckets of tears everywhere?   If the songs on  Blood on the Tracks  give us a world in which heartbreak is endemic and inevitable, then it’s the New York Sessions that are still reeling, still hung up, still raw.

There are photos of him at the time of the recordings, waiting around in the swanky lobby of A&R’s Studio A. Standing in a white-walled room that looks like a set halfway between  Logan’s Run  and  Emmanuelle, he poses with his guitar and what can only be the infamous blazer. In the first few shots he stands shyly, chin deep in his lapels. He strums a little bit beside a cup of coffee–but, eventually, he’s lying flat on the white shag throw rug, looking like he’s been run over.

Tangled Up in Blue

Two months later, he was given a test pressing of the album which he took back with him to Minnesota and played for his brother. The younger Zimmerman sagely advised that said album was too dark and downbeat to be commercially viable. The album opener (‘Tangled Up in Blue’) was too laidback and melancholy; the solo version of ‘Lily, Rosemary, and the Jack of Hearts,’ was just too damn long; ‘Idiot Wind’ had no bite to match its bark; why was everything in the same weird tuning, and what about those noisy buttons on his jacket? Columbia HQ was phoned and told to apply the brakes. A group of local musicians were rounded up in Minneapolis and half the album was re-recorded over four more nights, with an aim towards revitalizing the songs. 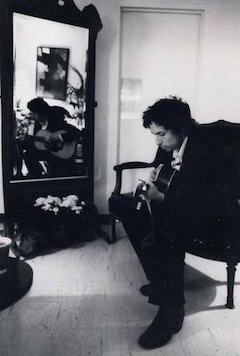 In creating a far more dynamic album, however, some of the finer nuances on individual tracks were undeniably lost. Because Dylan was mostly unaccompanied on the New York Sessions (and because every song shared that same open-E blood-type) it was left primarily to his vocal to give the songs their shape. Throughout the early sessions, it is his phrasing that adds depth and emotional range, drives the songs down their storied paths. You need only compare the different versions of ‘If You See Here, Say Hello’; on the record-as-released, it sounds as if the band have all agreed that this is a torch song and supplied lugubrious atmospherics accordingly. Earlier, in New York, Dylan could have been singing from the floor of the studio lobby, so beaten-down is the performance (on one take, his vocal is nothing more than a deathbed whisper). ‘Idiot Wind,’ too, lost something in the space between September and December 1974: where the fiery official version spews forth increasingly mad accusations, the earlier, more subdued performance leans more towards regret and fatalism (to such the extent that it becomes ambiguous who’s hurting who, who’s fated to be lying in that ditch, blood on their saddle). The rawness of the songs recorded in New York  all suggest an emotional vulnerability. The performer was still walking wounded, still howling in the night. On these tracks, the blood was still wet. words / dk o’hara

If You See Her, Say Hello

17 thoughts on “Bob Dylan: Blood On The Tracks – The New York Sessions”