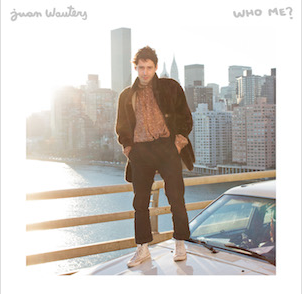 Juan Wauters, the Uruguayan poet and songwriter, makes his physical home in Queens and his artistic home in the space cleared by Jean-Luc Godard. Like Godard’s Breathless, Who, Me? politely acknowledges the world outside of its creator’s bedroom but spends its time and artistic energy on semi-intimate, largely wandering conversations whose consequences matter but go emotionally unacknowledged. It’s an album about charm, in other words. And like Breathless, Who, Me? doesn’t just get by on charm; charm is its greatest asset.

Plenty of “things” happen in Who, Me?, Wauters’ second LP. He argues with family back home in Uruguay. He tries to convince a woman to sleep with him, pointing to staying warm in the cold Queens winter as a compelling enough reason. He tells us that another woman looks her best when wearing leather and fur. And while Wauters has an almost preternatural gift for and grasp of songwriting – his arrangements and melodies seem like they’ve always existed and have just been sitting around waiting for him to articulate them – the songs themselves depend wholly on Wauters’ delivery.

Take “She Might Get Shot,” the aforementioned song about the woman’s clothing. It’s an easy, slightly loping number that pitches Wauters’ voice and guitar against a rolling little piano line. As it draws to its close, a group of people clap and cheer, and Wauters breaks into what seems like a spontaneous paean to the wardrobe: “Thanks to leather! Thanks to fur!” It’s goofy, sure, but it doesn’t come across as canned or precious. In standout “Woodside, Queens,” Wauters tells his potential lover that the ice on his toes makes him need to pee, and he does it without batting an eye. Wrapped up in his romantic, slightly wistful melody, he may as well be complimenting the color of her eyes.

These matter-of-fact observations that Wauters strings throughout Who, Me? are the connective tissue that holds the album together. They can be harsh – “You’re so ugly with good teeth/Why don’t you lend your body one more time to me?” goes the chorus of “Woodside, Queens” – but they rarely come across that way. They’re the kinds of things that people say when they’ve become deeply comfortable with one another. “Through that red I see your breast,” he points out in another track, and whether he’s warning someone about to leave the house in a too-sheer top or is lying next to her in bed, his delivery draws us into an otherwise private and kind memory.

That intimacy is augmented by the album’s barebones production. There’s not a ton going on here: Wauters accompanies himself on nylon-stringed guitar, there’s usually a shuffle of drums, and a treble-heavy bass plays the lead melody. It could have been recorded in an apartment in the early evening. Whether that’s the case or not, Who, Me? ultimately works because listening to it feels like looking in on a few friends playing together after a couple of drinks. What matters isn’t what they say or how they got there. They’re there. words / m garner