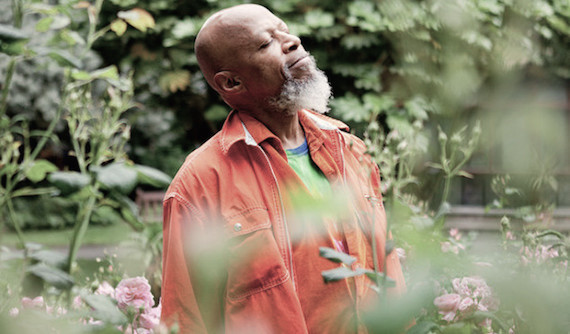 The music of Laraaji is defined by its joy.

Born Edward Larry Gordon, Laraaji’s music draws from many sources, including his studies of Eastern spiritualism, avant-garde minimalism, and Gamelan rhythms, but it connects directly to his days working as a comedian in Greenwich Village. To hear him discuss it, laughter is more than a pleasure – it’s an entry way to cosmic awareness, and that cosmic awareness drives his beautifully open compositions.

In recent years, Laraaji’s work has enjoyed a resurgence. He was featured in Light in the Attic’s landmark new age anthology, I Am The Center, and he’s collaborated and performed with young artists like Blues Control and Julia Holter. Earlier this year, Leaving Records reissued three of his albums, compiled as All In One Peace, and Friday, November 13th, Glitterbeat Records reissues Ambient 3: Day of Radiance, his 1980 collaboration with producer Brian Eno (whose All Saints label has also released great collections of his work).

Aquarium Drunkard spoke with Laraaji early one fall morning about working with Eno, a cosmic vision which inspired his work, and his shift from slapstick comic to sonic healer.

Aquarium Drunkard:: Let’s go back to the late sixties; you were hanging out in Greenwich Village, doing stand up comedy. What kind of jokes were you telling? What was your routine like?

Laraaji: Slapstick was always one of my interests, even since childhood. When I was doing solo standup the material was whacky, offbeat, silly, ridiculous. It was aimed at really getting people to crack up and fall in the aisles. Sometimes it was self-sacrificial humor; one of the routines was based on my attraction to women who were less than very beautiful, in other words “ugly women.” My routine was about how I met the ugliest woman and fell in love “at first shock.” After a while, because I was also investigating yoga consciousness and meditation, I got to the awareness that my material was inappropriate for someone who was going into yoga consciousness. It was based on polarizing an audience and bringing someone down. So that started to shift my comedy.

I managed to get a manager and a booking company to speed me along. I got to do stand up comedy and MC for a couple of years at the Apollo Theater. But I was always going for what I love: seeing people crack up and laugh. In later years, I became discerning about how I approached that, [finding] a more “green” kind of laughter. [Laughs] I began doing laughter workshops, [providing] a holistic kind of laughing experience.

AD: There’s so much joy in your music. Does that tie back to comedy in some ways?

Laraaji: Laughter in itself, to me, is one of highest expressions of success. In the moment, it represents that our breath has been released. Whatever has been bugging us, our anxieties or problems – lifetimes of relationships, business, or personal health situations – in the moment of laughter, [there’s] relief or release from pressures and depression. It is a moment of triumph. Deep laughter is the triumph of the soul over the problems and issues of one’s personal life or the problems of a nation or a species.

To laugh often is to keep the breath open and the energies of the body flowing. And then there’s communal laughter, the laughing of a community. Start with the family, the laughter of a family getting together for a meal or a holiday. There’s something about a giggling kind of joyous, smiling, lovableness that’s not necessarily fueled by jokes or humor, but just the joy of being in each other’s presence. Laughter is a sensation of communal bonding.

AD: As you began focusing more on music, did you find musical experiences that explored that kind of communal power?

Laraaji: A major one occurred somewhere in the mid-‘70s, after I had gotten serious about meditation and diving deep within myself. I attracted a “sound vision,” an experience of hearing, feeling, and receiving vast, cosmic orchestral sound. The experience itself may have lasted five or ten minutes, and the emotional impact of that sound expressed itself as a cosmic or celestial union of everything in the universe vibrating at the same time, everything in the universe present in the cosmic now.

That “everything being here in the present moment” is probably the ultimate sense of family reunion, of all things: planets, star systems, species – four-legged and two-legged. The sensation, or I could call it the “awareness” or “the breakthrough of consciousness” to experience the infinitude and infinity of this present moment, set the new model for what I felt sound could do. After that experience, that’s what I wanted to do: Bring forth a music that would stimulate or awaken a celestial or cosmic communal consciousness, that we’re all here, one, right now.

AD: Were you already playing the autoharp at that point?

Laraaji: No. I was living in Queens, New York, at the time. I was married, and I needed extra cash, so I decided I would pawn my guitar. But instead of getting money, I followed this guidance to swap it for an autoharp. This happened a month or two after having that sound vision. I didn’t make the connection between the two, but the sound vision just opened me up. Part of my longing was unarticulated, but it was like, “How can I make music like that?” I can’t write it down, I can’t record it. What can I do with this experience which is too beautiful to let it slip away? I wasn’t making the connection that my being guided to work with the autoharp was the cosmic answering me.

AD: That was the instrument Brian Eno first heard you playing.

Laraaji: After I got it from the pawnshop, I was guided to experiment and explore the instrument by modifying it – modified tuning, modified physical appearance, modified electronics. I used a performance technique that was a blend of different techniques from playing on percussion instruments, hammered zithers, playing on drums, and [I began to] evolve a vocabulary that made it an interesting instrument to be listened to on the sidewalks of New York.

AD: He heard you and slipped you a note and you came to work together on Ambient 3: Day of Radiance. As I understand it, Eno’s definition of “ambient” was something along the lines of “music suitable for active or passive listening.” This sounds more along the lines of “active” music to me.

Laraaji: Yes. He made a very sincere attempt to brief me on the word ambient when we met. It was the first time I heard that term. I came at it from a meditative, contemplative, peaceful [place].

AD: What feelings were you hoping to evoke with Day of Radiance?

Laraaji: Usually, I go into a performance or recording space with a tuning that is pre-designed, that evokes some kind of beautiful emotional experience. The word “celestial” comes to mind. I find a tuning that is groovy, beautiful, that’s fun to work with, that has valleys and mountains and oceans and star systems in it. [It’s as if the] tuning itself almost has something to say, and it’s up to me as an artist to fish around and feel for what this tuning wants to say. As an artist improvising and exploring, I just had this feeling for this tuning.

AD: Leaving Records recently reissued three of your early albums on cassette, their original medium. Were there advantages to that format versus vinyl at the time?

Laraaji: It was less complicated. I could get a cassette recorder and record myself. I could record 90 minutes if I chose to, and record in my living room or wherever I found the time to do that. I wasn’t that financially empowered to seek out recording on vinyl. It seemed like vinyl required going into a studio or someone with a high quality recorder. I was making cassettes to supply the people who were asking for them on the sidewalks of New York. People would say “Do you have a cassette of that,” so I would go home and whip up a cassette and have it to them in three or four days. I did do vinyl when a producer and finances came along; the first album was Celestial Vibration and the second was of course, Day of Radiance.

AD: In recent years people have begun to investigate in earnest music classified as “new age.” To what might you credit that renewed interest?

Laraaji: The innocence of new age music is a resource that listeners might want or need in the particular age that we’re going through on the planet. New age music allows the listener the feeling of an innocent child, yet honors our sensibilities for peaceful, contemplative inner harmony and making that a priority, making that a definite intention. Maybe even one that overrides the intention of just making a groovy sound or just pleasing someone who’s going to use it as background social music. New age music seems to have the intent of being present in a way that is supportive of higher, gentler human needs, whether its convalescing, healing, or just needing a soothing background to accompany the life process – whether that means creativity or just staring out of a window. words / j woodbury