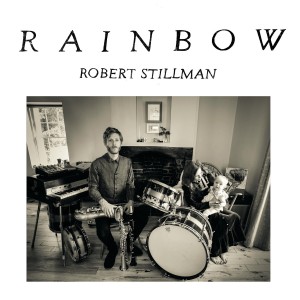 Born in Maine, Stillman’s collaborated as a multi-instrumentalist with members of Grizzly Bear and Here We Go Magic songwriter Luke Temple, but on this album he works alone, layering breathy sax, electric and acoustic piano, field recordings,  fluttering woodwinds, and splashy drums into a wooly  tapestry that invokes the astral jazz of Alice Coltrane, the minimalist works of John Adams, and the complex folk studies of Harry Partch.

Inspired in part by the loss of Stillman’s daughter, Ruth, Rainbow does feature moments of swooning melancholy — see the haunting opening ballad, “Ruthie In May” —   but its most common mood is one of uplift, heard on the hymnal “As he walked into the field,” and the looping, playful “Warren is a great car.” Even when the album doesn’t directly reference the spiritual jazz movement, as it does on the closing song, “Epilogue,” Stillman sounds as if he’s drawing on a deep reserve of sacred conviction. He’s featured on the back cover with his daughter Romilly and his wife Anna, surrounded by instruments, and the black-and-white photograph speaks to the core of the album:  Rainbow is a record of dedications — to family, to traditions, and to musical freedom. words/ j woodbury

Robert Stillman :: As He Walked Into The Field