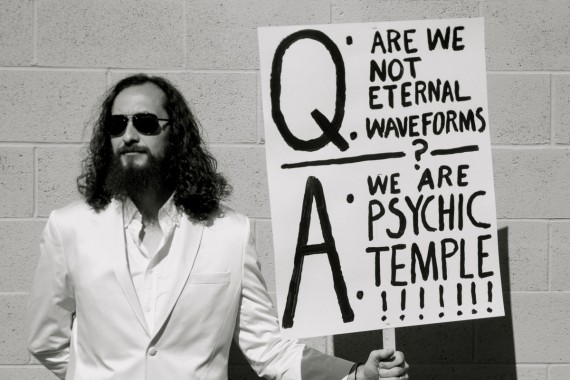 Psychic Temple is on a tear: In the last couple weeks, the group, led by composer/songwriter Chris Schlarb, has released not one but two excellent records, the loose-limbed Psychic Temple III and a reimagining of Brian Eno’s 1979 album Music for Airports.

The twin albums demonstrate Schlarb’s ability to synthesize styles and approaches, combining fusion-era Miles Davis, the English folk rock of Fairport Convention, experimental jazz, rock & roll, R&B, and pop. Working with collaborators like Nedelle Torrisi, Mike Watt, David Hood, Spooner Oldham, and more, the recent work reflects the blooming of Psychic Temple from a conceptual solo project to a full band, capable of strutting boogies, progressive complexity, and sophisticated grooves, and for the first time, confident, commanding vocals. Schlarb discussed the new albums with AD from his place in Long Beach, where he was prepping to head out on tour.

Chris Schlarb: I feel like there’s been a wholesale transformation since the first record. For me, there’s a thousand connecting threads. Damn near all the same people who played on III played on I, it’s just the context is different. I’m singing, rather than it being this exploration of ambient music and jazz and folk. But by the time III rolled around, I was a bit more adamant about [releasing it as a Psychic Temple record]…It was a little bit easier to convince them this time around.

Chris Schlarb: It turned into a band. There was a core of people who kept coming back, and we just kept exploring new territory, but we were doing it together. I really love the idea that this is its own entity. In the future, if I put out any records under my own name, those will be different even still.

Psychic Temple :: You Ain’t A Star

AD: So, no real cult would actually call itself a cult…

AD: …But you kind of refer to Psychic Temple as a cult. I wonder if you could explain to me how it operates in that capacity, or why the designation appeals to you.

Chris Schlarb: There are so many correlations between the way a cult operates and the way a band operates…they’re essentially the same goddamn thing. You usually have a leader – either your frontman, songwriter, or producer or whatever, there’s usually a driving force – and there’s a cult leader, one guy everybody rallies behind. When you go on tour you’re essentially proselytizing, going from city to city, like any good Christian revival, trying to convert new fans to the flock, to convince them to follow you, believe in you, buy into what you’re selling. [Laughs] I don’t see how that’s any different from a cult or religion.

I think also, I’m really fascinated by the concept of the cult of personality, they way people will worship celebrities. The kind of faith they place in them – I really see no difference, again, from that of a cult or religion. Look at how Pitchfork worships Kanye West. Part of it is financial, but that’s just another layer you could come back to, because they know it’s going to sell advertising, but also, there’s this kind of angle where a fanbase or media will continue to regurgitate stuff with no journalistic process. Look at Trump! It’s like, here’s what the press release says, and the press release said it was a masterpiece. [Laughs] It’s like this unchecked suspension of disbelief, which is the exact same thing that’s required for any kind of mind control. I look at a lot of modern music the way I look at religion: the emperor’s got no clothes. A lot of people will keep regurgitating this lowest common denominator nonsense because it’s easier than digging a little deeper, doing your homework, finding out more about what you espouse to believe. For me, all these things are kind of co-mingled into this giant art project.

AD: So what I’m hearing you say is that the next Psychic Temple album will be all Kanye West covers?

Chris Schlarb: [Laughs] Now see, that’s a deeply cynical thing to do. Psychic Temple II had three covers on it, it had a Beach Boys cover, a Zappa cover, and a Joe Jackson cover. These are all songs I love; I can’t bring myself to try and pour into music I don’t like some sort of passion. But I do think there are contemporary artists who do that sort of thing all the time in an effort to stay relevant or what have you. They’ll cover music or buddy up with people in positions of power and I dunno, I can’t do it. One time I had an opportunity to write a theme for a TV show, and it turned out to be a great show, but what they asked me to do was write a song that sounded like Sufjan [Stevens]. I couldn’t do it. I knew the building blocks of what they meant – the drum ostinato, probably something in 7/8, the Stereolab-ish repeating vocal refrain with xylophone.

Chris Schlarb: I knew what they meant, but I couldn’t bring myself to attempt it because it holds no wonder or mystery for me. The whole point of music is to keep finding new things in it. If someone tells me, we want you to do something like this guy, my first thought is go get that guy. For him, that’s honest. For me, it’s deceit.

AD: You recorded a lot of Psychic Temple III at your place in Long Beach, but you also went to Muscle Shoals.

Chris Schlarb: I was on tour and I gave myself a couple days off. I went to New Orleans for a few days. At the beginning of the tour, I called Fame [Studios] about booking a day. They gave me a crazy rate – especially compared to places in L.A. – I was like, OK, this is ridiculous how cheap it is. They asked me if I needed anybody to play with me on my stuff. I asked who’s available, and they said, Spooner is in town, David Hood’s in town. I was like, yes, yes. I had no idea they still operated that way, that essential those guys live half an hour, an hour away from the studio, and they will just come in to do sessions. So, I wrote “I’m Not Far Behind” and “Road Song” specifically for them to play on. I knew their catalog, everything from Wilson Pickett, Aretha, Otis, Staple Singers, to Dylan, Neil Young, Traffic. I know that shit, so I know their wheelhouse and I wrote those two songs for them to play. It was an absolute honor and to go to Fame. It’s a monument, it’s a testament to artistry and stubbornness and I love both of those things.

AD: You tap into some pretty classic sounds on this record. There are moments that remind me of straight up Zeppelin. Did you have any apprehension of employing sounds that would feel so familiar to people?

Chris Schlarb: Here’s the interesting thing to me: I’ve never done music like this before. It’s completely sincere. I’m not coming into it with some sort of angle, I’m like, “let me try and write a cool song.” I’m bringing all of my crazy baggage – the melodies I write, the instrumentation I put together – but “When I Know,” the working title for that was LZIII, because it reminded me of my favorite parts of Led Zeppelin III. It was a lot of fun for me to jump into it and say, “Damn, this stuff feels good. No wonder people write music like it.” I’ve spent the last 20 years challenging myself and playing avant-garde music, experimental, drone music and noise and free jazz. Coming into this new period from that angle was just so much fun. I honestly thought I could never write music like that, but it just became this constant well of inspiration. The muse was there in a way I’d never felt it before. And it’s still there. I just finished Psychic Temple IV a few weeks ago, it’s mixed already, and I’m already four or five songs into the next one. I’m just in this period that’s like, “Man, it’s so exciting…” to have a group of musicians who’ll back me up and roll with me – trust what I’m doing but bring their own voice to it, that means everything to me.

AD: You guys just released your interpretation of Brian Eno’s Music for Airports, too.

Chris Schlarb: In July of last year I jumped into a partnership with a recording studio [All Welcome Records] and I thought, “Cool, let’s just make a lot of cool shit happen immediately,” things I’ve always wanted to do with the space and opportunity. So I put together the first session for Psychic Temple IV on a Saturday, and Sunday was Music for Airports. Both were huge, highly-involved things to do – back to back. And they couldn’t have been more different. The band I put together had Tabor Allen and Sheridan Riley on drums, Mike Watt and Dave Tranchina on bass, Phillip Glenn and Cathleen Pineda on Hammond and Wurlitzer, myself and Paul Masvidal on guitars, and three horn players, Kris Tiner, Curt Oren, and Danny Levin, and the idea was: we get all these people in a room, no overdubs, just record and take a couple of stabs at this arrangement. I controlled the ensemble with this light box – I’d turn it on when a grouping of musicians was “allowed” to play. I could control the ensemble visually, to really control the dynamics of the improvisation. Other than that, I didn’t give the group a bunch of hoops to jump through. In a group setting like that, I tell everybody something a little different.

AD: So that you can shake up the results?

Chris Schlarb: Exactly. It goes back to the cult thing: it’s all psychology. The way people are going to act or react; you don’t want to have a group of people waiting for you to tell them what to do. With some people, you tell them I really want you to fuck everything up. You have permission to do that. That’s going to set off a chain of events throughout the rest of the ensemble, and the great thing is, I didn’t ostensibly instigate it. I just planted it. words / j woodbury