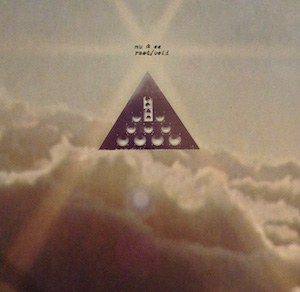 Several years ago, I discovered that MV & EE held the distinction of being the Most Represented Artist in my record collection, nudging out previous record-holders The Fall. I confess this not to assert my authority when it comes to MV & EE music, but to sympathize with those curious listeners who are perhaps intimidated by an enormous and overwhelming discography, not knowing the way “in.” To those listeners I say Root/Void is the entry point, not merely because it encapsulates almost all of the myriad styles, strengths, and charms of this long-running duo (it does), but because it is one of the most compelling, imaginative, and unique modern psychedelic records made by anyone in recent memory.

Over the years, Matt “MV” Valentine has sharpened his instantly recognizable production style to a fine point, and Root/Void is nothing if not a feat of production; the album is a showcase for MV’s cauldron of sound, at once meticulously layered and dubwise deep. Fans of collage-style trips from Anthem of The Sun to Twin Infinitives will find layers to untangle and unravel here, while appreciators of the band’s homegrown melding of Comes A Time-era Neil with microtonal bummer blues can add “Much Obliged” and “Feel Alright” to their list of indispensable MV & EE alternate reality “hits.” Elsewhere, the thick layers of field recordings, disembodied voices, stoned guitar and buzzin’ fly synthesizer of “I’m Still In Love With You Love > Void” posits a Hudson Valley version of the dusted musique concrete of Daevid Allen’s Gong.

It’s an open secret among MV & EE diehards that the albums that most prominently feature Erika “EE” Elder are often the group’s best, and Root / Void is an “EE” album the way Washing Machine is a “Kim” album; Elder’s vocals and keening lap steel guitar haunt the album’s every unexpected turn, threading together spacey tremolo-damaged guitar, decrepit drum machine, and tabla fog, the north (dark) star above MV’s currents, ripples, and waves. Rumor has it Root / Void ran well over deadline and well over budget, which alone doesn’t place it alongside hard-won masterpieces like Tusk and Loveless; the fact that it is just as singular, insane, and beautiful as those once-in-a-lifetime works, however, makes it more than welcome in such conversations. Sleepers, awake! words / j jackson toth