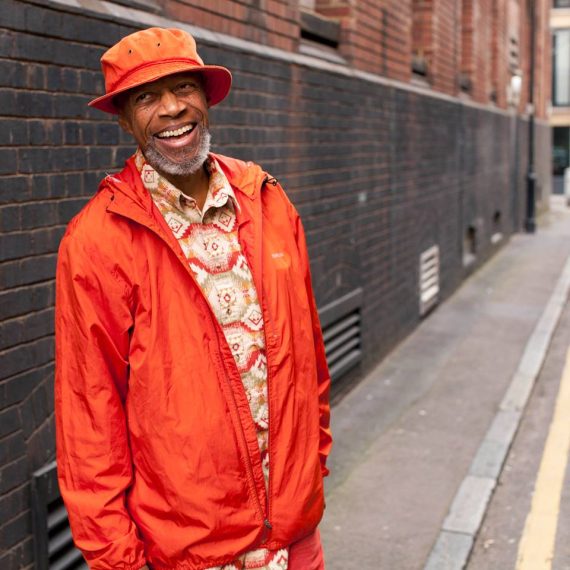 As evidenced by our last conversation with composer and teacher Laraaji, the man has a magical way with words. While so often contemplative music is defined by its serenity and placidity –to be clear, this is a feature, not a bug — Laraaji’s music balances its calm with spikes of animated joy. On his two new albums, Sun Gong and Bring on the Sun, he eases into worlds of pure sound vibration, creating a vibrant set of albums which convey his playful mysticism.

In advance of a reissue of his 1984 LP Vision Songs by Numero Group in January 2018, Laraaji joined AD via Skype to explore how his background as a comedian influences and infuses his work with its particular  humor and radiance.

Aquarium Drunkard: You have two new albums,  Sun Gong and Bring on the Sun. Do they have a connection in your mind?

Laaraji: They were recorded in the same three-day session.   The gong by itself is a direction of music, more of a sound vibration exploration. I use it for meditation and journeying.

AD: How does the sun tie into the proceedings?

Laraaji: During the improvisation in the studio, a song emerged, and the chorus line was, “Bring on the sun.” Matthew Jones of Warp Records liked that as a title of the album, even though the song didn’t make it to the album. Sun Gong was also suggested by Jones before we even started the recording, which sounded great to me. [I am drawn to] the energy of the sun, the significance of the sun as an all-radiating, eternal service being up in there in the sky.

AD: Do you have a daily spiritual practice?

Laraaji: It’s pretty improvisational and loose-flowing. It involves waking up and sitting quietly, silently, reconnecting with my fundamental essence, which is timeless, wordless emptiness. You can call it “stillness.” Sometimes, I’ll incorporate laughter, or if I’m in the right space, I’ll do some yoga exercises. For the remainder of the day, if I’m in a park, I’ll sit quietly, or do my form of Tai chi movement. In the evening, I’ll usually do a lot of freeform dance movement classes, movement medication, with the Gabrielle Roth’s 5Rhythms dance classes here in New York. They use dance as a form of meditation, opening, and circulation of energy.

AD: Does reading factor into it?

Laraaji: I read a lot of metaphysical and mind science material. I return periodically to the material of Judge Thomas Troward. His books, The Edinburgh Lectures on Mental Science and The Dore Lectures on Mental Science, and also Ernest Holmes’ book, The Science of Mind. Those are three of my favorite books. Now and then, I’ll dive into some A Course in Miracles, a thick collection of writings that were channeled by a psychotherapist in the 1970s.

AD: You started out as a comedian. Is laughter essential to your spiritual practice and outlook?

Larraaji: Yes, delving into comedy in high school and college, working with comedy teams, moving to New York in the mid-‘60s to pursue a career in stand-up and film comedy…[I followed that path] until I learned about laugher meditation in the late ‘70s and the early ‘80s, and designed a workshop around the benefits of heavy laughter. That shifted my movement within comedy, moving from depending on nightclubs and stand-up routines to workshops and conferences and meditation centers, usually in New York and eventually in Europe. They’ve developed into as long a two-hour, sometimes a three-hour, exploration into chanting, using the health benefits of laughter, directing our laughing voice into the body…to relieve stress and prepare the listener for deep sound listening as a yoga.

AD: Do you often find people have a misconception about meditative and contemplative music, that those practices are overly serious and not as joyful as they seem to be for you?

Laraaji: I find that to be the case for newcomers to the spiritual path. It depends on the teacher they’re exposed to. I’m finding there is a population of teachers that bring good nature, spirit, and humor to the yoga class, to help bring students out of the old model of the serious, dramatic teacher and solemness of the pursuit of spiritual reality. It can be a joyful experience. Positive, sunny, smiling, laughing.

AD: Who were some of your favorite comedians in college?

AD: A lot of the performers you mentioned – chiefly Gregory and Pryor – served as commentators on society.

Laraaji: Very much. They woke us up to the spirit of the voice. They were saying things the masses of black people at the time didn’t know how to say for themselves or where to say and vent it.

AD: Do you feel like your music plays a role in commenting on your own reality or our shared reality?

Laraaji: My music comments on the journey of awakening, of moving to higher options for life and living. To move from stress to flow; to move from the blues and sadness to more bliss and balance and equilibrium. I believe my songs address our ability to use the imagination and will to bring one’s lifestyle more in alignment with the heart’s real desire, to move beyond suffering for self and to help others move out of unnecessary suffering.

AD: You also worked as an actor, appearing in the film Putney Swope. Do you ever miss acting, or do you find that music allows you to tap into some of those same creative energies?

Laraaji: I do find that in the studio and in performance I delve into the same internal movements that I do in acting. It helps my music to emerge and liberates me from a single character or single sense of personality. Like doing character acting, I’ve found I can do “character singing,” let the voice assume a different character in order to help transport the message and sensation of the music. That happened on Bring On the Sun. The album includes at least three songs in which acting plays a role in delivering the lyrics and emotional intent.

AD: Do you find that the characters and personas you tap into emerge from the improvisational process, or do you spend time developing them beforehand?

Laraaji: Both cases. For instance, there’s a wafting general character of a deep rural, backwoods Southern [man]– kind of a shamanic elder – who occasionally encounters the urban person and startles the urban person with deep wisdom, through the use of broken English or unrefined English [in the songs]. Then, there’s a character who emerges from a deep transcendental trance, who speaks with a deep timeless wisdom voice. Those are characters who keep emerging during improvisation. And then a personality will come out of the sky, to facilitate the particular needs of that song or passage of words.

AD: Do you find these characters are rooted in your own imagination or something else?

Laraaji: Some are rooted in my own imagination, others come as the result of listening to comedy. I listen to a lot of comedy on Pandora. There are some very fine and funny comedians out there. I’m listening so much I find the influence seeps into my delivery.

AD: He’s got a lot of voices. I can see that being influential.

AD: What makes a joke work for you?

Laraaji: Now, it’s delivery. There is an attitude in the voice of the delivery, and attitude in cooperation with or in opposition to the words being spoken. There’s a comedic intention that stimulates. The body language of the delivery can be suggested in the voice – there’s a vocal character and a strong whine. Comedians have a “schtick” and a “whine.” A “whine” is a continuous flavor, a continuous energy in the voice, that identities that material. The “schtick” is the way their material or subject matter, or how they go about pulling the audience into the zone of spontaneous laughter. That’s what can pull me into laughter. words / j woodbury