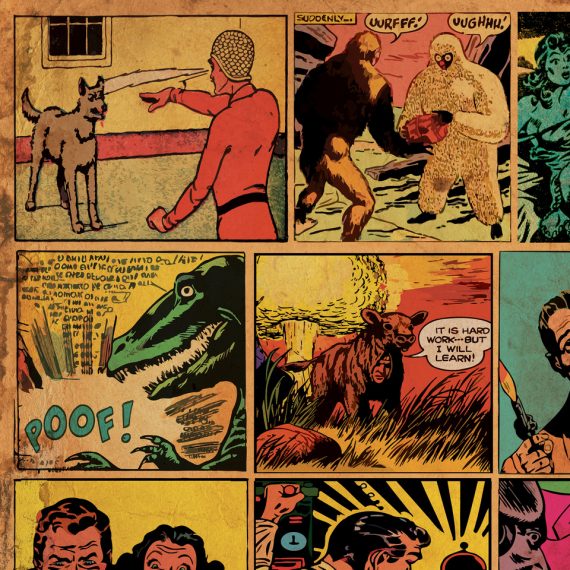 On 10 Seconds to Collapse, the new full-length collaboration between Tim Rutili of Red Red Meat/Califone and Craig Ross (Shearwater, Lisa Germano, Spoon, Patty Griffin, Robert Plant, Daniel Johnston), the duo tear down and reassemble a set of compositions evoking folk, pop, and psychedelic rock & roll song forms. The resulting eight-song lp is a damaged but nonetheless pleasant listen; a charmingly disorienting spin through dystopic themes. The duo’s previous, 2016’s Guitars Tuned to Air Conditioners, was a meditation on electricity and drone, but the new record hews a little closer to Califone’s 2013 album, Stitches, which Ross contributed to alongside a wide cast of players assembled by Rutili. Like that album, it borders on the apocalyptic, cutting out familiar scenes which become weirdly revelatory removed from their source. It wasn’t a decision per se, but rather a natural development and outgrowth of the two players’ friendship.

“It’s like a coping mechanism,” Rutili says. “That’s what we joke about: the darkest, most horrible stuff. Even though it wasn’t a conscious effort to make a record about this most horrible time, it just found it’s way in there.”

Recorded over the course of two years in Los Angeles and Austin, Texas, the record offered a chance to try new ideas, to “extract all the useful stuff,” Ross says. It provided a chance to shake off preconceptions both musicians had built up about their work, to shake loose the burdens of being in charge of the record making process and tinker more. With equal footing, the two stumbled onto a new process that found both serving as de facto producer, performer, and songwriter. Two heads, one beast.

“I think part of it was trial and error, but Tim and I, aesthetically we appreciate the same things,” Ross says.

And so on songs like “Choke,” the twosome’s attraction to AM pop gold shines through. But in typical fashion, it’s mutated. Like the album’s cover, by pop art collage maker Shane Swank, it takes recognizable images and contrasts them against each other. What comes from disparate places ends up cohesive and strangely sound. “Say what you’re saying/on and on and on and on,” Ruliti sings, making bizarre sense. “The winter wars turn to green/escaping Alcatraz, keeping your gods in my pocket, your gods in my pocket.” words/j woodbury