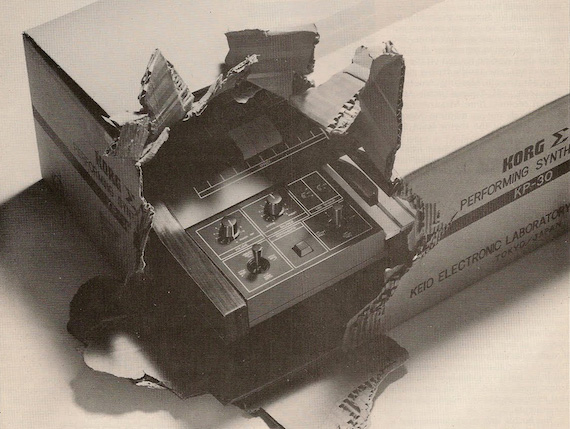 Welcome to the third installment of our quarterly Bandcamping roundup. As a digital institution it’s hard to beat Bandcamp. It’s ridiculously easy to use, it puts money directly into artists’ (and labels’) pockets and there’s a seemingly endless amount of music to discover there — new, old and in-between. Of course, that endlessness can be a little overwhelming. Here are 10 more recommended releases – old, new and in-between. words / t wilcox

Saariselka / Ceres: Saariselka is a collab between Marielle Jakobsons (Fender Rhodes, organ, synthesizers) and Chuck Johnson (pedal steel guitar and treatments), and this 17+-minute track is pure bliss from start to finish. “Ceres” is part of a thing called Longform Editions out of Sydney, Australia — “an ongoing series of music pieces curated to foster and celebrate immersive listening experiences for the musically adventurous.” Put it on a loop and spend the next few hours in the heavens.

Pierre Sandwidi / Le Troubadour De La Savane, 1978-1980: This terrific compilation of tunes from Pierre Sandwidi, a beloved musician from Burkina Faso (formerly known as the Upper Volta), is packed with buoyant synth-guitar-drum machine excursions that will certainly brighten your day and put a spring in your step. William Onyeabor fans will approve. Turn it all the way up.

Tohru Aizawa Quartet / Tachibana: The liners describe the musicians here as “amateurs” but if these guys are amateurs, to hell with the professionals. Tachibana was recorded in the mid-1970s and released in very small quantities in Japan, soon becoming a sought-after collector’s item. The Tohru Aizawa Quartet seem to have fully absorbed the transcendent/incandescent vibes of Coltrane’s mid-60s period, and they use that classic sound as a launchpad for some roller-coaster fire music.

Dylan Golden Aycock / Guitar Meanderings Vol. II: A very nice offering from guitarist extraordinaire Dylan Golden Aycock, gathering together worthy some odds-and-ends from over the past few years. The vibe is late-night and meditative, drifty and dreamy. In its more abstract zones, you might get a Loren Connors feel; in its more straightforward moments, it’s as elegiac and beautiful as Bruce Langhorne’s Hired Hand OST (which Dylan reissued a few years back). In other words, you’ll love it. 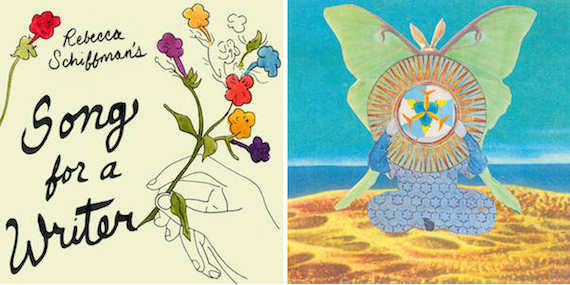 Rebecca Schiffman / Song for a Writer: You’ve got two minutes to spare, right? Sure you do — though fair warning: you’re probably going to want to listen to Rebecca Schiffman’s “Song for a Writer” more than once. Recorded in collaboration with ex-Girls guy John MF Anderson, it’s a mellotron-infused slice of pop perfection, equal parts buoyant and melancholic. Just right! And hey, if two minutes isn’t enough, go check out Schiffman’s excellent 2016 LP, too …

Skygreen Leopards / The Jingling World of the Skygreen Leopards: It’s been a little while since we’ve heard new tunes from the Skygreen Leopards (Donovan Quinn and Glenn Donaldson), but this Soft Abuse collection, gathering 24 long-lost tracks from the duo’s first CDRs, will do nicely for the time being. “The restrictions were that no songs could break the three-minute mark, no jamming allowed, and you never went back to fix mistakes.” Chiming 12-strings, wispy vocals, ramshackle rhythms, ghostly reverb – this is perfectly imperfect pop. 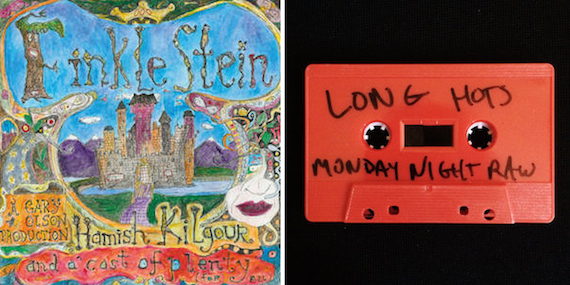 Hamish Kilgour / Finklestein: The latest from Hamish Kilgour (The Clean, Mad Scene, etc) is a ramshackle handcrafted technicolor masterpiece, with a loose narrative running through it. The sound is marvelous, with Gary Olson (you may know him from the Ladybug Transistor and other orch-pop projects) adding all kinds of engaging elements to the mix: saxophones, pedal steel, keys and more. I especially love the dark groove of “Whistle Stop.” As I was listening, I thought of both Nilsson’s The Point! and the Floyd’s Zabriskie Point soundtrack. You get the point!

Long Hots / Monday Night Raw: We’ve had to make do with a handful of Long Hots live joints for the past year, but the trio has finally emerged with a tape/download – and it doesn’t disappoint. Monday Night Raw is indeed raw, with five blazing jams propelled by the Moe Tucker-esque thump of Eva Killinger (ex-Spacin’) and thudding bass of Kathryn Lipman. The righteous rhythm section gives Rosali Middleman (you’ve picked up her recent solo album, right?) plenty of room to shred.