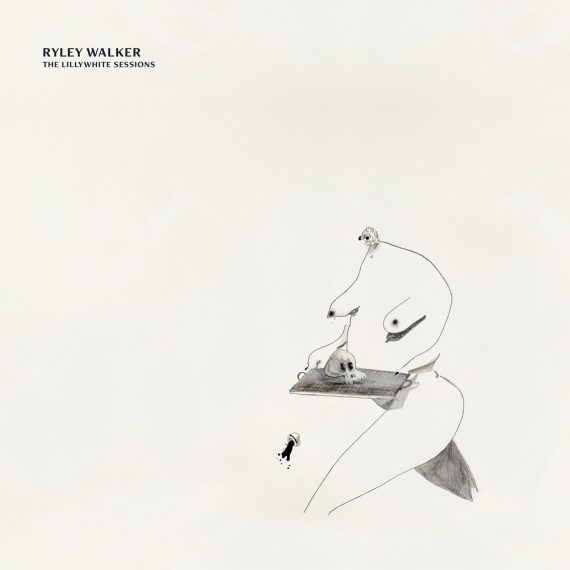 Earlier this year, Chicago-based songwriter and bandleader Ryley Walker released his fourth full-length lp, the knotty and darkly funny Deafman Glance. But Walker’s on a tear. On November 16th, he releases his second record of 2018, The Lillywhite Sessions, a reimagining of the Dave Matthews Band’s lost album. Originally recorded in 1999 and 2000, many of these songs surfaced on the DMB’s shined-up 2001 lp Everyday. But for their new album, Walker and collaborators Andrew Scott Young and Ryan Jewell took inspiration from the initial, stranger, and altogether less-polished takes, using them as raw materials with which to fashion something new and unexpected. These are far from faithful renditions; Walker opens “Grey Street” with discordant, minimalist reeds, recasts “Kit Kat Jam” with a math rock tint, and brings a sense of impressionisitic melencholy to the bleary “Sweet Up and Down.” For all the instrumental reinvention though, Walker seems keenly tapped into the existential fears that the DMB’s buoyant jams have a tendency to obscure. “Bartender please, fill my glass for me,” Walker sings on “Bartender,” the album’s best moment. “With the wine you gave Jesus that set him free/After three days in the ground.”

On “Busted Stuff,” the first taste of the forthcoming album, Walker draws a line straight from Chicago post-rockers the Sea & Cake to the DMB. Though mocked and derided by many as Clinton-era feel-good fluff, Walker highlights both the musical adventurousness and lyrical darkness that exists in the best Dave Matthews Band material. Those listening for the sly, ironic tone that characterizes Walker’s social media feeds may find themselves initially baffled. These are songs about mortality and grace, surprising and genuine.

We rang Walker up to discuss. His thoughts, below.

“I legitimately do like Dave Matthews. I’m from the suburbs of Chicago. I’m a fucking white dude, so of course, some Dave Matthews records came my way. At a Christmas party, me and Eric [Deines of Jagjaguwar, a sister label to Walker’s label Dead Oceans] were drinking, and we’d be like ‘Wouldn’t it be sick to cover a Dave Matthews record?’ One day he said, ‘Hey, I think I can actually get a budget and make this happen.’

We decided to cover The Lillywhite Sessions, an earlier version of Busted Stuff. They made the record with [producer] Steve Lillywhite and for whatever reason, it didn’t work out. They said, ‘Let’s try again,’ and they shelved the sessions. But they infamously leaked on Kazaa, LimeWire, Napster…and every Dave fan was like, ‘This is the best version.’

It’s all out of love, but there’s a little shred of irony in there. I’m in the indie rock world; I can’t cover a Dave Matthews record without having to explain myself, without a little context. But it’s all out of love. If somebody doesn’t like it, I understand. But if you were in high school, say before 2005, Dave Matthews was so in the lexicon, in the culture of America. Everyone 40 and under has heard Dave Matthews.

I guess the easiest criticism would be jocks liked him a lot, that frat culture, which I fucking hate, too. But we live in this post-guilty pleasures world. There are no more guilty pleasures. I was talking to a friend the other day, [about how at one point] Steely Dan was a band for nerds and record heads. And now they’re the most influential band in indie rock. It’s hilarious. Everyone is kind of coming around. I don’t know if Dave will have that same, ‘Hey, we’re sorry man, it actually turns out you’re the fucking best.’ But I think it’s a good time to release this, [and] I’m genuinely super-proud of it.”

The Lillywhite Sessions is available November 16th via Dead Oceans.