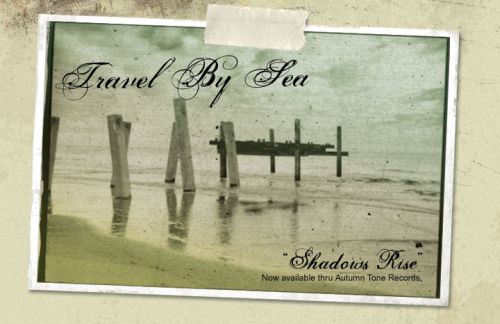 Autumn Tone (our label) has just reissued Travel By Sea’s debut LP Shadows Rise in preparation for their next LP “Days of My Escape,” which will be released via Autumn Tone in the late summer. We are big fans of this outfit, and thrilled they are on board with us. Do check them out…

No ordinary post-folk outfit, Travel by Sea’s music explores an aural countryside far past the traditional confines of their predecessors. While tales of travel and distance have long been songwriting mainstays for generations, Travel By Sea builds their vivid, spacious music on a new frontier: The ability to craft songs from afar. For nearly three years Tustin, California’s Kyle Kersten and Denver, Colorado’s Brian Kraft have been painstakingly building their music via the internet. Their 2006 self released debut “Shadows Rise” won critical acclaim and a growing legion of fans worldwide. Look for their much anticipated follow-up “Days of My Escape” to be released late summer 2007 on Los Angeles’ Autumn Tone Records.