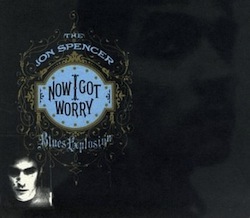 Imagine Orange kidnapped, blindfolded, tossed in the trunk of a car—doused with gasoline, lit on fire, and set adrift at 80 miles an hour, in backwoods Mississippi, under a new moon. That is, approximately, the sound of Now I Got Worry. In the scheme of the Blues Explosion catalog, this one bad voodoo—this is their boilermaker.   It may also be my favorite.

I picked up this record the first go-round, in 1996, and with it now seeing the deluxe reissue treatment, it’s interesting to note how the underground rock atmosphere has changed in the past fourteen years. As others have noted, the Blues Explosion’s sound was an abomination at the time. Grimy, confrontational and brimming with libidinous attitude, it was the polar opposite of the near sexless indie rock of the time. In 2010, in light of the success of the Black Keys, White Stipes, etc, the album hardly feels like the outlier it was in 96. But an outlier it was. The Blues Explosion, and more explicitly, Spencer, were in your face—whether on wax or on stage—taunting, baiting, lewd and lascivious. While an argument can be made that it’s this exact shtick that ultimately led to the band morphing into a slight caricature of itself towards the end of the 90s, upon its release nothing could have been further from the truth. At the time, the Blues Explosion were a welcome hot shot in the arm of rock & roll.

If Orange, its predecessor and ‘commercial’ breakthrough, is the stranger’s candy, Now I Got Worry serves as the uneasy aftermath. Over the course of the album’s 45 minutes, Spencer’s warped vision of primal delta and hill country blues (and its backwoods handlers) comes to a head. Gone are Orange‘s grand orchestrations and pageantry—there are no Beck cameos here—in there place: maniacal howling, gutbucket funk, fatback r&b, barrelhouse piano, scratch guitar and the nicotine-phlegm delivery of one Rufus Thomas. Yeah, that Rufus Thomas. Per usual, amidst Spencer’s hellhound delivery, Judah Bauer and Russel Simins provide the backbone that holds everything together. Under the influence of their friend, and sometime collaborator, R.L. Burnside, Now I Got Worry finds the band in the psychic headspace of jamming at a juke-joint an hour before dawn. The magic hour—captured here in the span of these 16 tracks.

The Reissue: Now I Got Worry 2010 has plenty of curios, and would be ephemera, for the die-hards: a dozen outtakes, radio promotional spots, etc. But, as is often the case with reissues, this reduxe package best serves the purpose of enticing those who may not have investigated the album (or the band for that matter) the first time around. Also back in print, and re-released, is the JSBX Controversial Negro live album. A gnarly beast, Negro, and a choice selection of live, mid 90s, youtube vids of the Blues Explosion at work should paint a fairly accurate picture of what was going down onstage every night during the band’s peak. Go ahead and take a dip—it’s a doozy.

11 thoughts on “The Jon Spencer Blues Explosion :: Now I Got Worry (Reissue)”