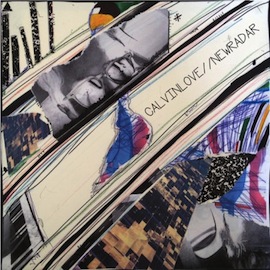 Calvin Love’s  music–the way it sounds–gives away the process responsible for its creation.  Its sparse musical landscape is populated by thin guitars, electronic drums, and occasionally vintage synthesizers,  which add a wooly, electronic warmth to the focused, slender arrangements.  The lo-fi, cassette, 4-track fidelity sets a very particular ambiance throughout New Radar, one that Love’s extremely comfortable in. The music sounds far away, isolated, like an intimate transmission generated via either antique or alien technology. It’s somehow both retro and futuristic. The hooks are arena-rock big, but Love’s use of primitive home-recording gear invokes the folksy approach of the bedroom mode, that squeezed, pop music in miniature indebted to a lineage spanning Ariel Pink to Unknown Mortal Orchestra.

Love’s real story is that he’s from Edmonton, Canada where there are long, cold, dark winters–conditions he claims are conducive to holing up and cranking on the bedroom music. He’s got a tumblr full of neatly Instagrammed pics documenting lonely street scenes and expansive, vaulting skies. His music and look play at the timeless role of the wistful romantic, sleeves rolled up, about to flee from one trouble to another on his motorbike. Love’s got an earnest and endearingly fastidious relationship with nostalgia. He’s interested in a strange, beautiful sparseness, but also an unpretentious, modern, everyman appreciation for classic FM hits.

The catchiest songs both bemoan love gone wrong: “Magic Hearts” tells of love transformed into something twisted and painful over simple synths, while “Waiting On You” details a frustrating relationship. “What have you got to lose?” Love baits on “Treasure Hunters,” a flirty yet laid back bubblegum rock and roller filled with suggestions like “we’ll share our secrets” and augmented by some far-out hand percussion. Snarky, wailing guitars–nay axes–duet with Love’s vocals in “Missions,” blending together in a noisy wash of exchanged frequencies. Love mostly relies on a handful of throwback synths and jangly guitar sounds to pick out kooky, unorthodox melodies, but it’s a dutifully clicking drum machine that drives the beat. He can make his voice strain and plead during moments like the chorus of “Star Dust.” In “Echos,” a flubby vocoder takes the lead, while flip-flopping blips and digital drums say “8-bit” and the strummy guitar says “slacker.” New Radar’s overall effect is one that collapses memories of the late ‘80s cassette/analog era, ‘90s cable-TV generation, and the ‘aughts social media confessionalism. It’s a satisfying collage, evocative and moody, yet familiar and comforting. words/a spoto