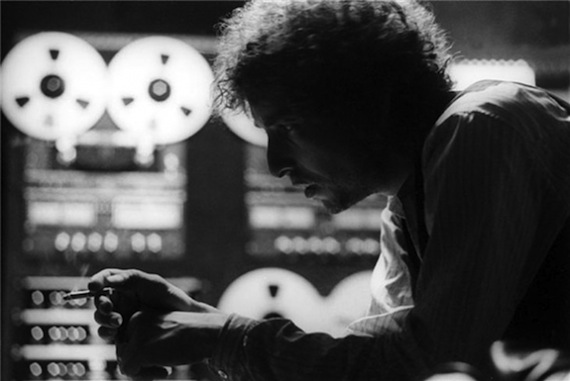 The announcement of the latest installment of Bob Dylan’s indispensable Bootleg Series is yet another reminder of the sheer depth of the man’s archives. But even with outtakes regularly emerging in official form, there’s plenty of great stuff still slipping through the cracks. With that in mind, we’re kicking off “Odds & Ends,” a new Dylan series highlighting stolen moments from the past 50 or so years. Here’s one that is likely to stay unreleased due to the decidedly lo-fi nature of the recording. But that aside it’s one of Bob’s finest moments. During a surprise appearance in NYC on the eve of his Rolling Thunder Revue tour, the songwriter debuted “Abandoned Love” for a tiny, obviously thrilled crowd, who probably assumed that this brilliant tune would be the centerpiece of Dylan’s next LP. And indeed, he attempted laying it down in the studio for Desire, but not to his satisfaction – that version wasn’t released ‘til the mid-80s on Biograph. Listening to the fire in his voice on this tape, you can see why; the studio version is positively watered down. “My head says that it’s time to make a change,” he sings, somehow sounding tortured and delighted all at once. “But my heart is telling me: I love you but you’re strange.” Story goes that the taper took a punch from one of Dylan’s buddies when his rig was discovered. We all owe that taper a beer. words/ t wilcox