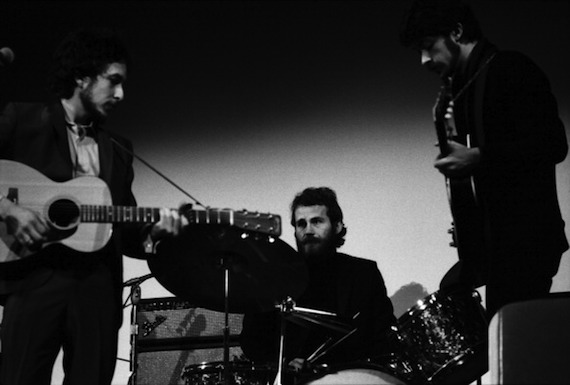 I know we’re all busy having our minds blown by the new Basement Tapes Complete box set that landed last week … but take a couple minutes to dig this very Basement-y recording of Bob and the Band (who may still have been the Hawks at this point) paying tribute to Woody Guthrie in early 1968. It’s the only live appearance Dylan made between mid-1966 and 1969, but he’s in fine and fighting form as he leads the boys through a rollicking rockabilly rave-up of Guthrie’s classic. Part of an all-too-brief three-song set, “I Ain’t Got No Home” sounds like Dylan and the Band sauntered out of Big Pink, already slightly toasted, and sped down to NYC to set Carnegie Hall ablaze. words / t wilcox