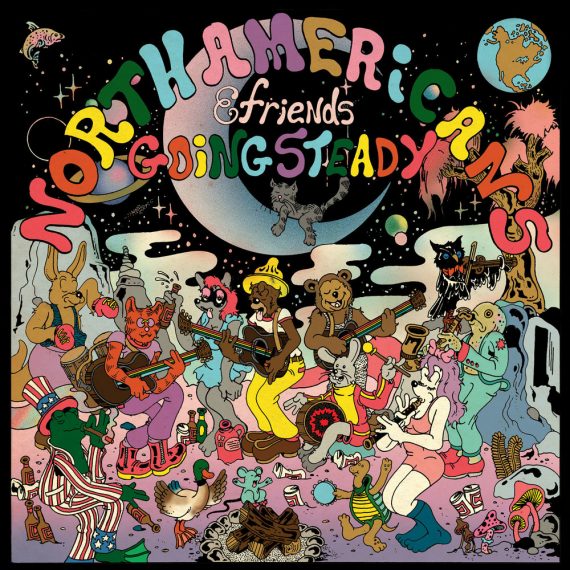 In the video for guitarist Patrick McDermott’s “Alice Lake,” the striped-and-starred frog that appears on the cover of North Americans’ Going Steady makes his way into reality. Swaying in meditative motion, lounging among rubble, and eventually loosening gravity’s grip altogether, the frog serves a mascot or representation of the feeling McDermott’s music provides. Over the course of the nine songs that comprise Going Steady, McDermott’s acoustic guitar and synth offer zones for silent contemplation, comfort, and weightlessness. Joined by contributors Hayden Pedigo, Julianna Barwick, Meg Duffy, Dylan Baldi, and Joel Williams, McDermott creates a space where contemplative music and guitar soli dovetail. You could even call it new age if you wanted —something about the gentleness on display here makes me feel like McDermott wouldn’t mind, but the sound of North Americans rewards active listening just as much as it does zoning out. Like director Rocco Rivetti’s video for “Alice Lake,” the lp is an exercise in “augmented reality.” In this space, there’s time to pause, to notice beauty, and to take stock. North Americans’ celebrates the release of Going Steady Tuesday, November 6, at Gold Diggers. words/j woodbury